**NOTE: MANY complaints received about Sango’s bad customer service. Please note this review might not be accurate anymore.

If you are looking for a Japanese restaurant that specializes in Yakitori, look no further than Sango @ Crystal Crown Hotel, PJ. The restaurant recently changed owner (previous owner was Japanese himself too) but the talented staff was retained, with an improved menu to make its appearance soon.
Sango’s kitchen is headed by Executive Chef Kazuhiro Inose, an all-round chef who can pretty much prepare any Japanese dish from appetizers to desserts. You can expect pure traditional Japanese food and ambiance here at Sango, there’s even Japanese newspaper and magazine available near the counter. Shown here is Chef Inose who was busy cooking the skewers, as seen from the Yakitori Bar. Let me just say that I was never a huge Yakitori fan. I go to Japanese restaurants looking for sushi, unagi and sashimi. And to me, Yakitori to me has always been something like a Japanese version of satay, which I never really fancied. My oh my how Sango changed my perception towards the dish. Now I know how a GOOD Yakitori should taste like.
My favorite Yakitori of the entire meal has gotta be the Chicken Wing Yakitori (RM7.80) It’s amazing how crispy the chicken wing can get by barbecuing them, it’s even crispier than those being deep fried! Only sprinkles of sea salt was used to season the chicken wings but it was enough to provide the flavor. The chicken wings had the joints conveniently cut so you can enjoy it without having to use your hands. Sashimi Salada @ RM16, a nice appetizer consisting of salmon and tuna sashimi slices with a touch of spiciness, interesting and delicious. Gobo Karaage (Deep-fried burdock) is said to taste best while it’s still hot. If left cold, the burdock would get hard and lose some of its tastiness. Since we were busy trying out the other dishes the burdock got sidelined for a while.
Despite being cold and a little hard, I still found it to be quite enjoyable for the crunchiness. Mayonnaise was provided for extra flavor because the burdock was much tasteless. Anyway this was a new dish to me and honestly I didn’t really like it at first. But the more I tasted it the more I liked it lol. Salmon Family Maki is a new maki created by Chef Inose that will appear in the new menu. The interesting name comes from the fact that a combination of different salmon parts like deep-fried salmon skin, salmon roe and salmon slices were used to prepare it. And this creates a combination of different texture in your mouth – from the crispiness of deep-fried salmon skin to the explosiveness created by salmon roe when it pops. It’s hard not to love Chawanmushi, we just had to have this in every of our Japanese meal. So if you are like us, you should try Sango’s Chawanmushi @ RM9 because it’s quite different from the ones you normally see. It’s bigger, better, and had more ingredients. Under the steamed egg is a chunk of meat, ginkgo and a big, fresh prawn. Another Yakitori I liked was the Aspara Maki (Asparagus rolled with Prime Australian Beef) Besides sea salt, it was also seasoned with some black pepper too – just wonderfully flavorful, tender and juicy. Cooked oysters have a stronger smell compared to the raw ones but it was nicely balanced by the cheesy sauce and garlic. Highly recommended. I found that almost every part of a chicken can be used for Yakitori, nothing goes wasted even the chicken tails (you will see later) This is a Yakitori Chicken Skin with Garlic @ RM6.40.
The name itself is pretty explanatory.. basically some skewered garlics wrapped with chicken skin. It was just ok for me because I am not a huge garlic fan. For price, I think it would be better to choose chicken wings instead. Here are some Yakitori that made use of Chicken Tails @ RM6.40. Now I think most people are a bit scared about eating chicken tails for hygienic and health reasons. Me too. After all, it’s the chicken’s butt we’re talking about here and it contains a lot of fat too.
But putting all the concerns aside, you can’t deny that Bonjiri (Yakitori Chicken Tail) is delicious for its muscular and tender texture – crunchy and chewy at the same time. Sango’s Special Meat Balls are available in chicken, beef or a mix of chicken and beef. According to Chef Inose, Japanese usually have their meat balls mixed so we had it that way too.
Before being served, the meat balls were coated with what I assume was Tare, a type of sweetened and thickened soy sauce widely used as dipping sauce in Japan. RM6.50 for each skewer, yummy and meaty! Yakitori is not all about barbecuing meat, even vegetable can be used. After barbecued, Japanese cucumber has a squishy and moist texture that melts in your mouth, nice. Another maki that we tried that day was Avocado Unagi Maki. It looked great and all but I was kinda disappointed with the bland taste, which I think was due to the small quantity of Unagi. The last Yakitori we had was Nankotsu (chicken cartilage) or also called the soft bones. What we usually discard is actually used commonly as a food ingredient in Japan. And it doesn’t come cheap too @ RM6.40.
To be honest, I think first timers like me would find it weird to chew on these excessively crunchy yet tasteless soft bones – I could only taste the salt. One thing I experienced after eating so much Yakitori was having a salty taste in my mouth due to the amount of sea salt used to season the skewers. So sweet desserts were most welcomed to ‘balance’ things up a bit lol.
We had a choice of Black Goma, Charcoal (the edible one), Green Tea and Sakura (Cherry Blossom) flavored ice creams, all home made by Chef Inose. We picked the latter two and that Sakura ice cream turned out to be the best for its milky and refreshing taste. Please do try this. Now for a brief tour of the restaurant.. this is the Yakitori Bar. If you want to see Chef Inose cooking, this would be the perfect place. And the non-smoking area If you are tempted to try Sango, I urge you to try their eat-all-you-can Japanese Buffet going for RM48++ per pax. It started from the 3rd Aug and will end on 30th Sep. Great for buka puasa too.
There are 70 dishes to choose from the buffet and it’s all ordered ala carte to ensure the food’s freshness, the only thing is that there’s no sashimi included in the buffet. It’s still a quite a deal considering the good food and I am surprised not many people know about this! Despite that, reservation is highly recommended. **NOTE: MANY complaints received about Sango’s bad customer service. Please note this review might not be accurate anymore. 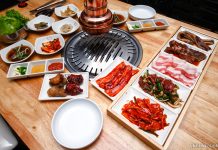 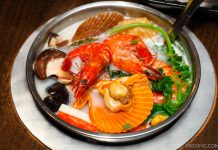