Sea Ocean Restaurant is a Chinese-Thai restaurant in Permatang Tinggi discovered by my sister when she attended a friend’s wedding dinner held there. The food was found to be good even when prepared for a large banquet. So we took it as an indication of being a hidden gem worth trying. Moreover, the fact that we seldom travel out of BM for dinner made the trip felt anticipated. Certain dishes that were served during the wedding dinner actually required booking at least 2-3 days earlier, for example the Whole Chicken Steamed with Chinese Herbs and Wine in Bamboo Steamer. We were unaware of this hence we couldn’t try it. But the waitress made a mistake by delivering one to our table, which was actually intended for the family seated next to us. Because of that we got a sight of the impressive looking dish. Too bad we knew it was wrongly delivered and had it sent back.. arrgh I should’ve snapped a photo of it lol.

Anyway the Cold Platter or Five Seasons is usually what we would have as the first dish. Each restaurant would usually have their own version but some dishes like Fried Sharks Fin with Egg (also my favorite) is always there. Sea Ocean’s Five Seasons @ RM40 that day consisted of Satay, Scrambled Egg with Sharks Fin, Kerabu and some spring rolls. This was actually the first time we had satay in a Chinese restaurant and it tasted quite good too! Lean pieces of meat were used and the gravy was thicker than the normal ones with loads of crushed peanuts. Nice. Steamed Scallops with Chinese Herbs @ RM20 that was quite affordable considering the amount of scallops given. The sauce was rich and flavorful albeit a little salty with a whiff of fragrant herbs smell that wasn’t too strong. When it comes to preparing prawns with ingredients intended to make drinks and spreads like Nestum, oats, butter, cheese etc, I believe they are no longer stranger to us. But Horlicks Prawns is definitely a first. Surprisingly Horlicks could taste really well with prawns with the correct cooking method – the sauce was rich and creamy with a little gritty texture and felt heaty as expected. I felt the price was quite expensive though for the medium sized portion @ RM30. Because we couldn’t have the signature steamed chicken, we had to settle for perhaps the second best chicken dish – Three Cups Chicken (Sanbeiji) @ RM12. The three cups always refer to a cup of soya sauce, a cup of sesame oil and the third cup could be rice wine or sugar.
This dish is particularly famous in Taiwan although it originated from Southern China. The dish’s preparation involves simmering the mixture of sauces for long hours until most of the sauce has evaporated with the flavor absorbed by the chicken meat completely. If eaten on its own, Sanbeiji is usually too heavy hence the dish is better taken with rice. Given that Permatang Tinggi is a small town, Sea Ocean can be considered a high end restaurant. Plus, the interior looks new, feel beautiful and oozes class. It could be the perfect restaurant for wedding dinners and to enjoy a nice, quiet meal with the family – the only problem would be the distance and above-average pricing. A revisit is certainly possible.. the steamed chicken is something unusual really worth trying. 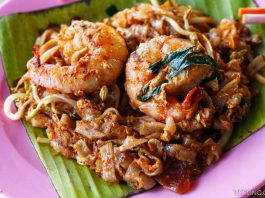 Eat August 28, 2015
ABOUT US
VKEONG.COM - Malaysia Food and Travel blog with reviews of restaurants, hawker and street food in KL, Penang, Melaka and beyond.
Contact us: vkeong@yahoo.com
FOLLOW US
© VKEONG.COM - All Rights Reserved