Frying skill aside, two of the main differences betweeen a good and normal Char Koay Kak are the cooking oil and soy sauce used. In the old days, Char Koay Kak stalls used only lard to bring out the most of the aroma and flavor. As time goes by, people get increasingly health conscious leading the hawkers to substitute the usage of lard with vegetable cooking oil.
Chan Kok Ming‘s Char Koay Kak at Batu Lanchang‘s market food complex is one of the hawkers who have heeded the call. He has since changed to use a mix of lard and Neptune cooking oil instead of some cheap sub-standard ones. The Char Koay Kak here can be ordered either plain (without egg and seafood) or with seafood, with the latter priced at RM3.20 a plate. Three kinds of seafood included are prawns, fish ball and crab filament sticks (not really a real seafood but yeah…) Although the fried rice cakes taste good enough on its own, the addition of seafood imparts a welcoming sweet flavor for only RM1 extra. And if you want, you can actually bring your own seafood to be fried together with your plate of koay kak too. I mentioned something about soy sauce earlier too right? Well, Uncle Chan uses his secret homemade soy sauce to flavor the koay kak, which is made by further fermenting a high quality soy sauce for a few days giving it a richer taste.
But to really bring out the full taste of the soy sauce, good wok hei is required. This is something that is totally dependant on the cook’s skill and experience as not to burn the rice cakes into having a charred taste. Despite being featured in many media and won quite a number of food awards, Uncle Chan and his wife are very nice and down to earth couple. Being Hakka, I could easily strike up a warming conversation with them and then realized that uncle was actually involved in an accident not long ago. Because of this, sometimes they won’t be open when uncle’s legs feel hurt, and standing for long hours is not good for his condition. 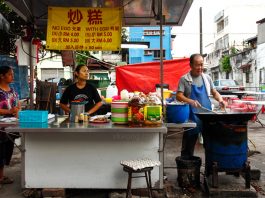 Eat June 25, 2010
ABOUT US
VKEONG.COM - Malaysia Food and Travel blog with reviews of restaurants, hawker and street food in KL, Penang, Melaka and beyond.
Contact us: vkeong@yahoo.com
FOLLOW US
© VKEONG.COM - All Rights Reserved