Secret Recipe recently launched a promotion of RM10 for a set meal, dine in only. I guess you have probably received it in your email or read it from forums. From what I saw it was very well received, especially among ladies. To be honest, the thought of eating at Secret Recipe never really crossed my mind because it’s not cheap. Anyway, yesterday I decided to give the promotion a try. A slice of Chocolate Banana cake @ RM6.30 as appetizer before the meals arrive. This is one of my favorite cakes! There are only 3 choices for the chicken main course: black pepper, BBQ and mushroom sauce. All of them cost RM13.50 each and comes with some salad and rice. The BBQ Chicken tastes like the Chinese sweet and sour chicken.. didn’t really had any BBQ flavor. ‘Gu lou yuk fan’ maybe also taste better :P The set meal also includes a glass of iced lemon tea, which costs RM5 if ordered ala carte. Nothing special about the Mushroom Chicken, and the meat was dry.. The cake was the nicest throughout the whole meal lol. And keep in mind that RM10 is not the nett price for the promotion, as it does not include the 10% service and 5% government tax. My calculations concluded that it’s about 40% discount on the food, if all ordered ala carte.

I felt the service tax was kinda undeserving because the staff was a not as friendly and had this sour face when serving us. Just FYI I dined at Jusco’s Secret Recipe in Seri Kembangan. And from what I read in the forums, some outlets can even be out-of-stock for the promotion.. So, better ask first before you go in lol. Oh yeah, actually you don’t have to print this voucher out too.. They didn’t bother to see mine ;) 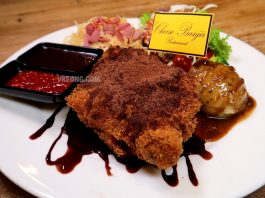 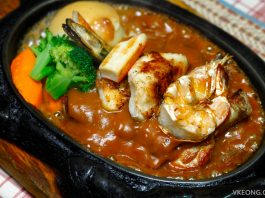 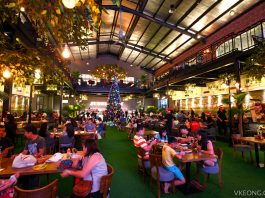 Kepong December 21, 2016
ABOUT US
VKEONG.COM - Malaysia Food and Travel blog with reviews of restaurants, hawker and street food in KL, Penang, Melaka and beyond.
Contact us: vkeong@yahoo.com
FOLLOW US
© VKEONG.COM - All Rights Reserved