On my quest to search for the best Bak Kut Teh in Klang, Seng Huat Restaurant was one of my stops. Famously known as one of the earliest Bak Kut Teh restaurant in Klang, it is also widely hailed as the best too. The restaurant is also known as “Under the bridge Bak Kut Teh”. Reason being its location next to a pedestrian bridge, not really under it as I thought.
I tell you, it’s really hard to find this restaurant and this was actually my second attempt. My first attempt failed miserably and I ended up eating at other BKT restaurants. And the traffic jam, road maintenance works and the many one way roads in Klang town only made things even more difficult. Ehh.. is that some hair on the meat? LOL. We were there early about 5pm and the restaurant was not prepared for any orders yet. They needed another 45 minutes to get ready so we enjoyed some Chinese tea while waiting.
I usually choose Tit Gun Yam for tea, or Hiong Pin (Jasmine Tea) if the former is not available. Drinking tea is a must for me when eating Bak Kut Teh to “wash” down all the meat consumed. Besides, tea also helps in the digestion later! Well I couldn’t be drinking tea for that long lol. So, I decided to snoop around the restaurant since it was pretty empty. There were some newspaper cuttings about famous chefs along with TV crews who travelled all the way from Hong Kong and Taiwan just to try the Bak Kut Teh in Seng Huat.
The documentary about Bak Kut Teh filmed by the crews was aired in Astro before, it was quite interesting. I know because I watched it like twice, lol. Apparently Ah Xian was here before too, can you spot him? The prices are nicely displayed on the wall along with another newspaper cutting of Hugo Leung, 梁文韬. A successful chef back in Hong Kong, he is more famously known as “God of Eating” – 香港食神. It says he was in Seng Huat twice for the delicious Bak Kut Teh. BTW, this guy was featured as the food taster and narrator in the Bak Kut Teh documentary I mentioned earlier. Finally, it was time for the sifu to cook and for us to get our much awaited clay pot of Bak Kut Teh. Although it was not the best Bak Kut Teh we had in Klang, it did not disappoint. The meat was nice and tender which to me, is the most important factor for good Bak Kut Teh. You can have the nicest tasting herbal soup in the world but if the meat is tough, it still fails. Nothing is worse than have to eat tough meat because it’s a torture. On the “Under the bridge Bak Kut Teh” name, this photo explains it all. And I think it’s a good idea to come early before 6pm, before the number of customers start to grow. At 6:04pm – restaurant was almost full with patrons including the restaurant’s extension. Overall I think Seng Huat‘s Bak Kut Teh was a good try and it did live up to its fame. There’s one thing I am not sure though – is Seng Huat really where Bak Kut Teh originated from? Some said it is while some claimed it’s actually another restaurant.
Well, I don’t really care which restaurant is the original one as long as the food is good. But I would really like to know. So if you have the answer, please drop me a comment and I will plan a trip to Klang again to try it. Thanks!

Other Bak Kut Teh restaurants I have tried in Klang before:
Fong Keow Bak Kut Teh
Hok Lai Bak Kut Teh – reviewed when I was a real noob 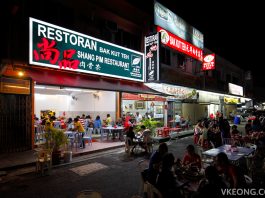 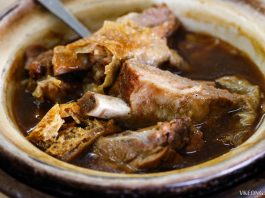 Bak Kut Teh March 30, 2017
ABOUT US
VKEONG.COM - Malaysia Food and Travel blog with reviews of restaurants, hawker and street food in KL, Penang, Melaka and beyond.
Contact us: vkeong@yahoo.com
FOLLOW US
© VKEONG.COM - All Rights Reserved