**The food prices shown in this post were based the last year’s menu. Senjyu Sushi’s new menu has a more affordable price of Kaiten sushi starting from RM2.

I am in the midst of clearing my archive posts, and one of them is my visit to Senjyu Sushi last year on New Year’s Eve. Senjyu Sushi proudly claims itself as the first premium Japanese Kaiten (conveyor belt) Sushi restaurant in Malaysia, where their delectable offerings of sushi and sashimi are specially airflown to ensure the best quality for customers’ enjoyment.
Being related to Sakae Sushi, they only launched less than a year ago in August 2008. And if I am not mistaken, there are two Senjyu Sushi outlets in Malaysia currently – one in Sunway Pyramid and another in Cineleisure Mutiara Damansara. The price for each plate of sushi (according to plate color) is clearly displayed at the side of each table just under the conveyor belt. The cheapest Kaiten Sushi (Red plates) are RM4, Black plates RM6, Grey plates RM8, Brown plates RM12 and Full Brown ones are RM16. Actually I am not a big fan of seasoned baby octopus but I took it anyway, one of the reason being it’s one of the cheapest around lol.
By the way, all the sushi we had that day (in Sunway Pyramid’s branch) were at least above average to great so I am not gonna elaborate much on the food. Just see see the photos lah ok. Remembered the sushi already, it was Ebi Tempura sushi! Forgotten this one as well, and I couldn’t find it in the menu too lol. Some sushi outlets prepare their Tamago (sweet egg omelet) too sweet, but I found Senjyu Sushi’s to be my liking. Yasai Miso Soup @ RM8.90. Not as salty as the normal miso soup, with yasai (wild vegetable or Japanese Spinach) and mushrooms used to prepare the light, tasty soup. A pair of Ebiko Sushi @ RM6, look at those red eye-catching granules! Usually the salmon’s length on a salmon sushi would only be as long as the sushi, but not at Senjyu (almost double the length!) So, when I saw it on the conveyor belt I just couldn’t help myself lol. Looking at some customers enjoying the Spider Cheese Maki so happily, we also decided to order one of it lol. It was the most expensive item we had that night at RM24.90. The Spider Cheese Maki is a long sushi rolled with Soft Shell Crab, Cheese and Asparagus, cut into bite sized pieces and sprinkled with fish roe sparingly.
Best tasting sushi of the night? You bet! Simply delicious and it was money well spent. We spent RM88.80 on food alone, and after adding in the 10% service charge and 5% tax the total bill was RM102.10, quite possibly the biggest amount I have ever spent on a single sushi meal lol.
But if you ask me if I regretted spending so much on the meal then my answer is no. It was a special occasion anyway and most importantly we had a wonderful time and got to enjoy nice food. 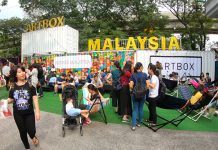 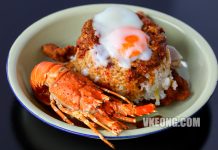