There aren’t many Japanese restaurants in BM so I am glad that Shunka Japanese Restaurant at Maju Utama Business Centre is a good one. This business centre is also home to a number restaurants and cafes like Bloggers Cafe, Station 1 and Old Town. Currently it is the most popular venue to hang out in BM, right after Autocity. Garlic Fried Rice @ RM4.90 – surprisingly more satisfying than expected for the nice ‘wok hei’ and portion. I have always thought felt garlic fried rice is served in tiny bowls only. Besides egg and chopped garlic, some minced meat and mushroom are included too. It has been a long time I have had sashimi so this Salmon Sashimi @ R 9.90 was purely to satisfy my sudden cravings. The freshness was OK and had a “frozen” taste and texture but honestly, I did not expect too much. Shunka is more of a fusion restaurant focusing more on Japanese food so you can also find Korean, Western and local dishes here. It’s good in a way because it would cater to more people especially families eating out. For example, my mom (and most parents anyway) is not used to Japanese food but she still could order Western food here.
I am not a fan of Korean food but according to my brother the Ishiyaki Bibimbap (Korean mixed rice cooked in heated-stone bowl) @ RM15.90 is pretty good, at least comparable to those in authentic Korean restaurants. It always come with rice seasoned with sauces, meat, vegetables and a raw egg. Then they are mixed in the heated stone bowl to cook. For me the Shunka’s signature Cheese Tamagoyaki @ RM6.90 is very recommended for its fragrant, cheesy and soft taste. This Japanese omelette, often used to judge a sushi chef’s skill, is a lot harder to prepare than it looks.
When we ordered for it we were warned by the waiter that the omelette would take at least 15 minutes to prepare due to its complexity. But the wait eventually became 30 minutes… So this is not the type of dish to order if you are planning to have a quick meal lol. The same for the Tebasaki (grilled chicken wings) @ RM2.90 – it took even longer than the omelette to arrive. Fortunately it was good else I would have gone into a rage fit lol.
The seasoning for the wings is quite different from what I have tasted previously. Instead of just sea-salt, teriyaki sauce is also brushed on the wings giving it a sweet flavor and a nice shine. Yaki Gyoza (pan fried dumplings) @ RM5.90 – a bit bland tasting so it could be better. During weekdays Shunka has some set dinners that are quite affordable and worthy of their prices too. Starting from RM8.90, most of the sets are a complete meal on its own including salad, soup, main course, green tea and fruits.
The Oriental Chicken Chop (Set E) set is the most expensive among all at RM10.90 but I also felt it is the best tasting one. The fried chicken managed to retain its crispy outer layer despite being drenched in the gravy. Set C was the Fried Prawn and Egg over rice @ RM9.90. I liked that they used only large, sea-fresh prawns. The prawn head was the most flavorful part so do savor it too if you are not afraid of the cholesterol. I felt the Fried Fish and Egg over rice (Set B – RM8.90) was the weakest despite it having a big portion of fish meat. It simply needed a heavier seasoning – well, at least for me. Overall the food at Shunka is worth trying but I am very concerned about the kitchen’s efficiency in pushing out the food during peak hours. The affordable set lunch and dinner alone are good reasons to dine at Shunka. It’s quite rare to see this kind of pricing for a complete meal already. For your information there is another Shunka branch at Parit Buntar too. 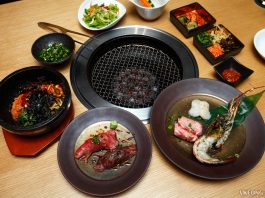 Japanese Food April 16, 2017
ABOUT US
VKEONG.COM - Malaysia Food and Travel blog with reviews of restaurants, hawker and street food in KL, Penang, Melaka and beyond.
Contact us: vkeong@yahoo.com
FOLLOW US
© VKEONG.COM - All Rights Reserved