If there is a list of restaurants doomed to fail because of bad management and service, Siam Express will definitely be on it.

As seen from this, Siam Express has an outlet each in Gurney Plaza and Queensbay. Also, I notice that most Thai food restaurants like to use black as the theme. Just Thai in 1-Utama would be an example. In Siam Express, all waiters dress in black and food is served in black plates. Heck, even the environment is dark.

I ordered a plate of Seafood Tomyam Fried Rice Wrapped in Omelette because it sounded nice. But what arrived later was a real disappointment, look at its portion! And that pathetically thin layer of omelette! Taste wise it was quite good, but the price RM12.90 for something like this is unjustified.

Pineapple Fried Rice @ RM12.90 tasted bland. And pineapples were given in tiny bits, not chunks. Compared to Just Thai’s version of pineapple fried rice, this one loses by miles.

During the meal, we requested for belacan from a young waitress for the bland Pineapple Fried Rice. She totally forgot about it like 2 minutes later and we had to call for another waiter. This time, it took him 5 minutes to search for a saucer plate and fill it with belacan. And they still dared to charge us 10% for the lousy service. What service? Worse still, we saw a couple being shouted at by one of the elderly worker. She instructed them to pay at the counter instead of bringing them the bill. So, please avoid this Thai food restaurant altogether if you are in Queensbay. Until they change their staff’s attitude, I don’t see any reason to patronize Siam Express at all. 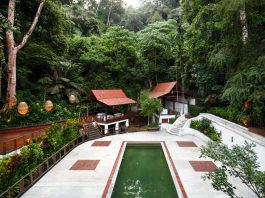 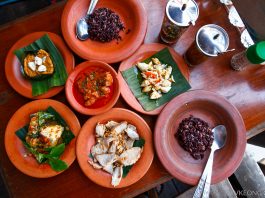 Bangkok January 4, 2017
ABOUT US
VKEONG.COM - Malaysia Food and Travel blog with reviews of restaurants, hawker and street food in KL, Penang, Melaka and beyond.
Contact us: vkeong@yahoo.com
FOLLOW US
© VKEONG.COM - All Rights Reserved