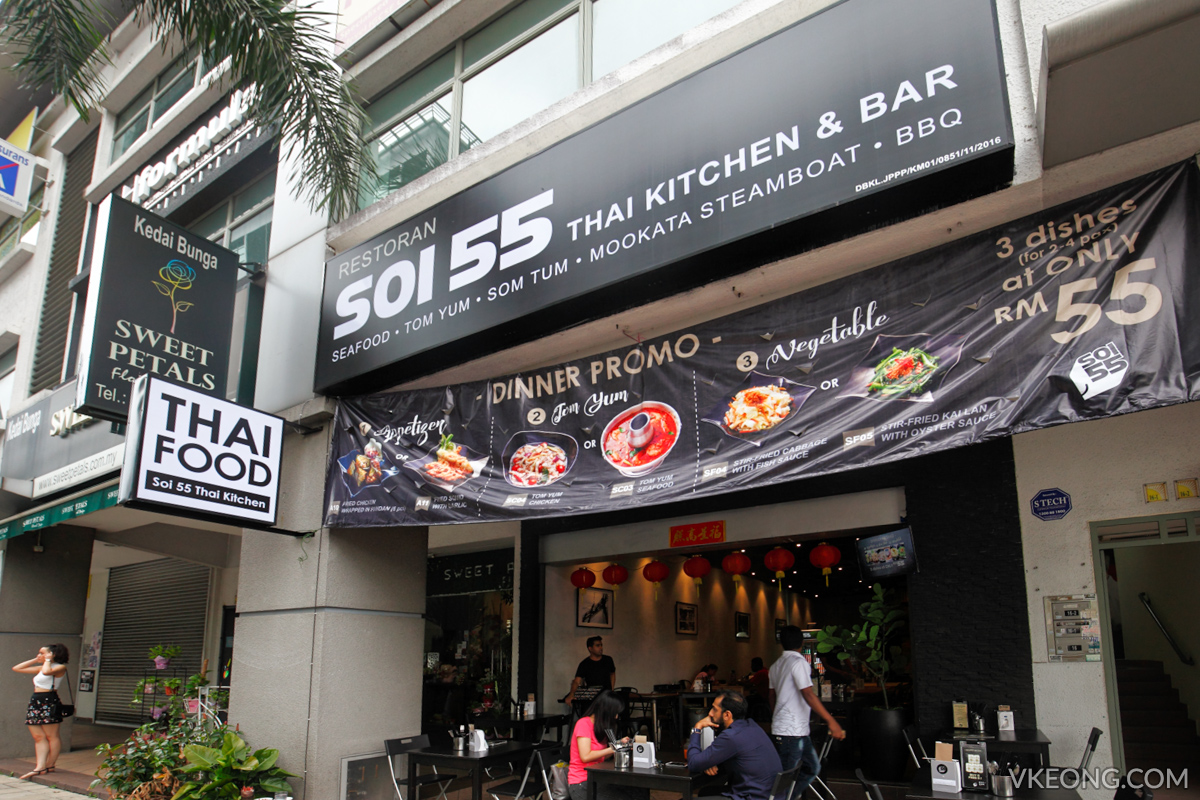 It’s high time Solaris Mont Kiara gets a proper Thai restaurant. Soi 55 Thai Kitchen & Bar opened about 4 months ago and it be found directly in front of Cold Storage.
Not only they serve good food, their lunch and dinner promos offer some of the best deals you can get in this area. 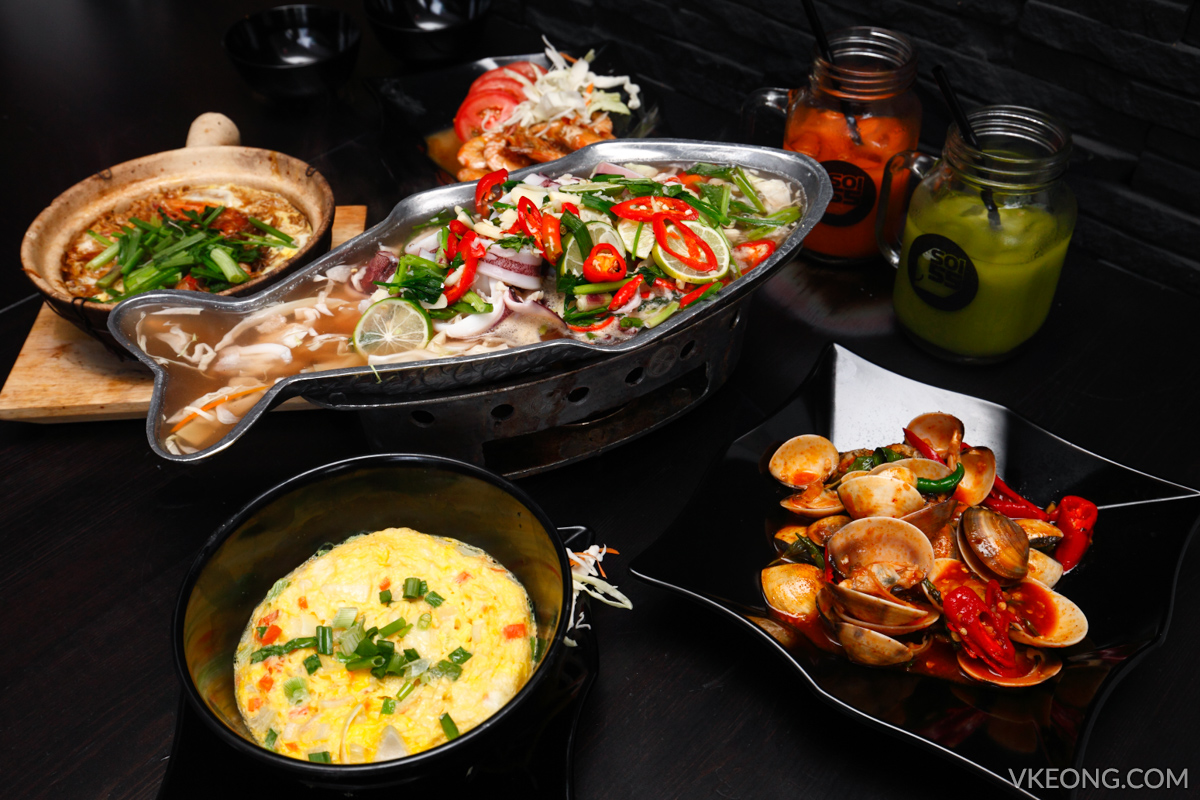 We dropped by last night for dinner and found the extensive menu full of various Thai dishes you could imagine. The aroma of spices from the kitchen was incredible, it filled every corner of the place and we could smell it even while seated at the five foot way. It was a good sign of things to come. 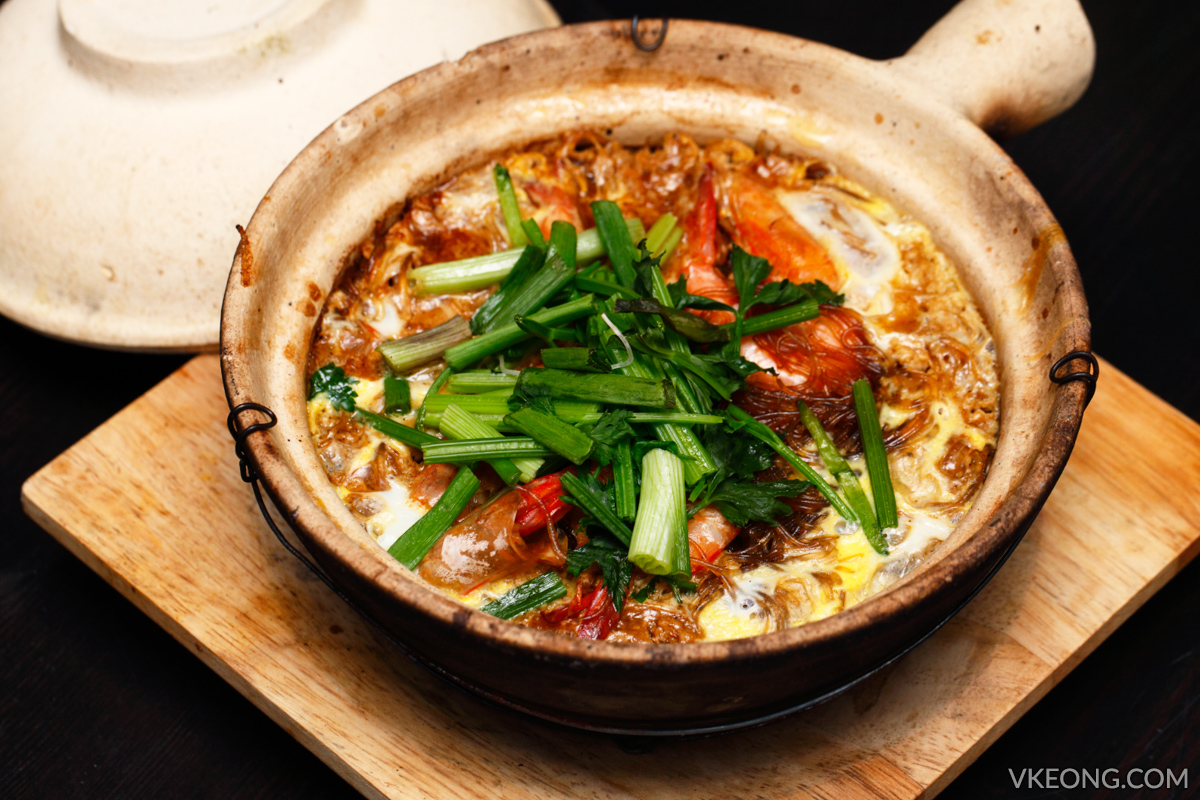 Among the things we ordered, the Prawn with Vermicelli and Soy Sauce in Claypot @ RM30 was the one we enjoyed the most. It’s kind of similar to what we had in Bangkok previously, but Soi 55’s pork free version is equally delicious. 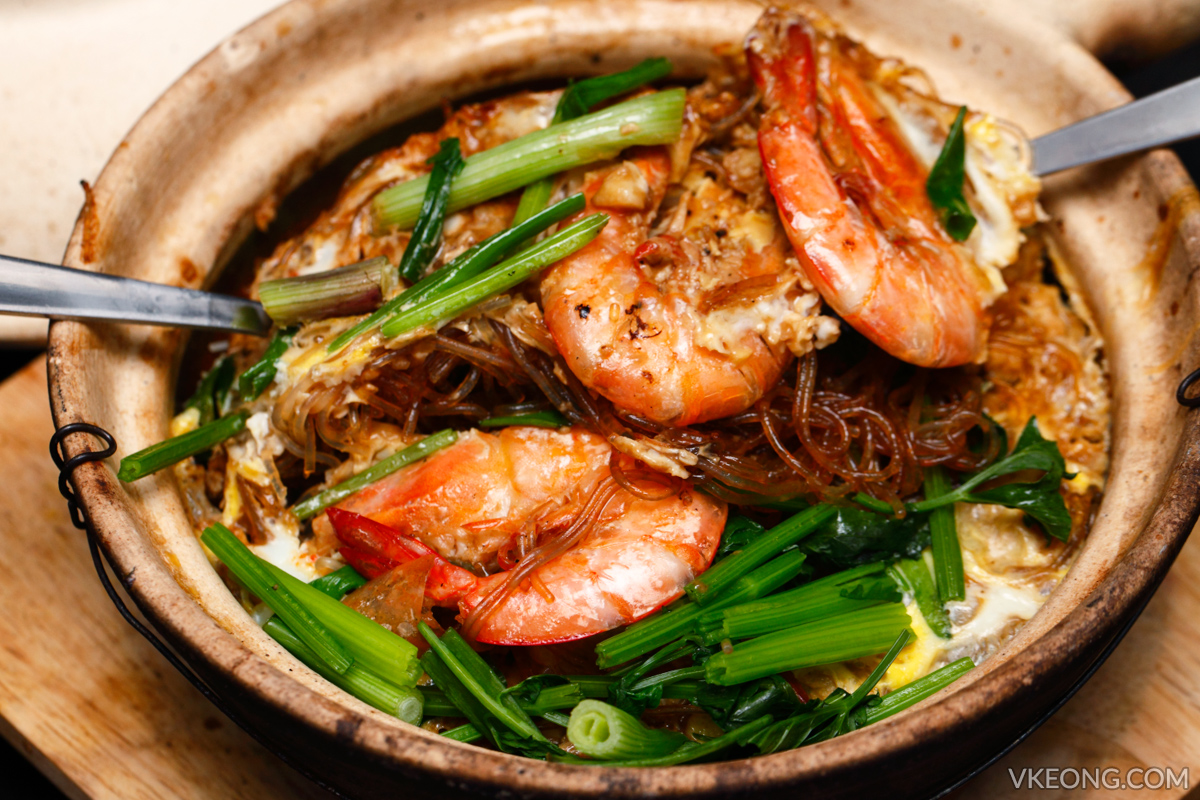 Instead of pork slices, the bottom of the claypot is layered with garlic bulbs and ginger to prevent the vermicelli from being burnt. The prawns were fresh, noodle was flavorsome, moist and didn’t stick together, so there’s nothing you could really ask for more. 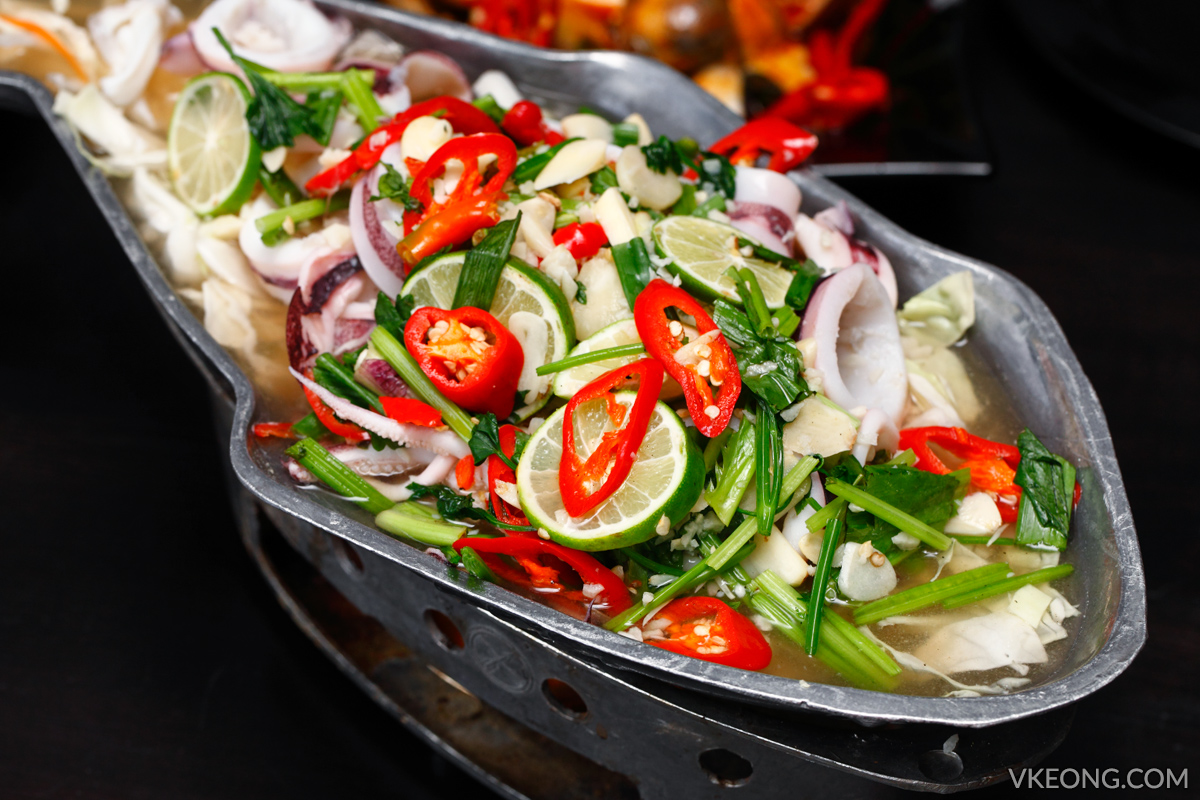 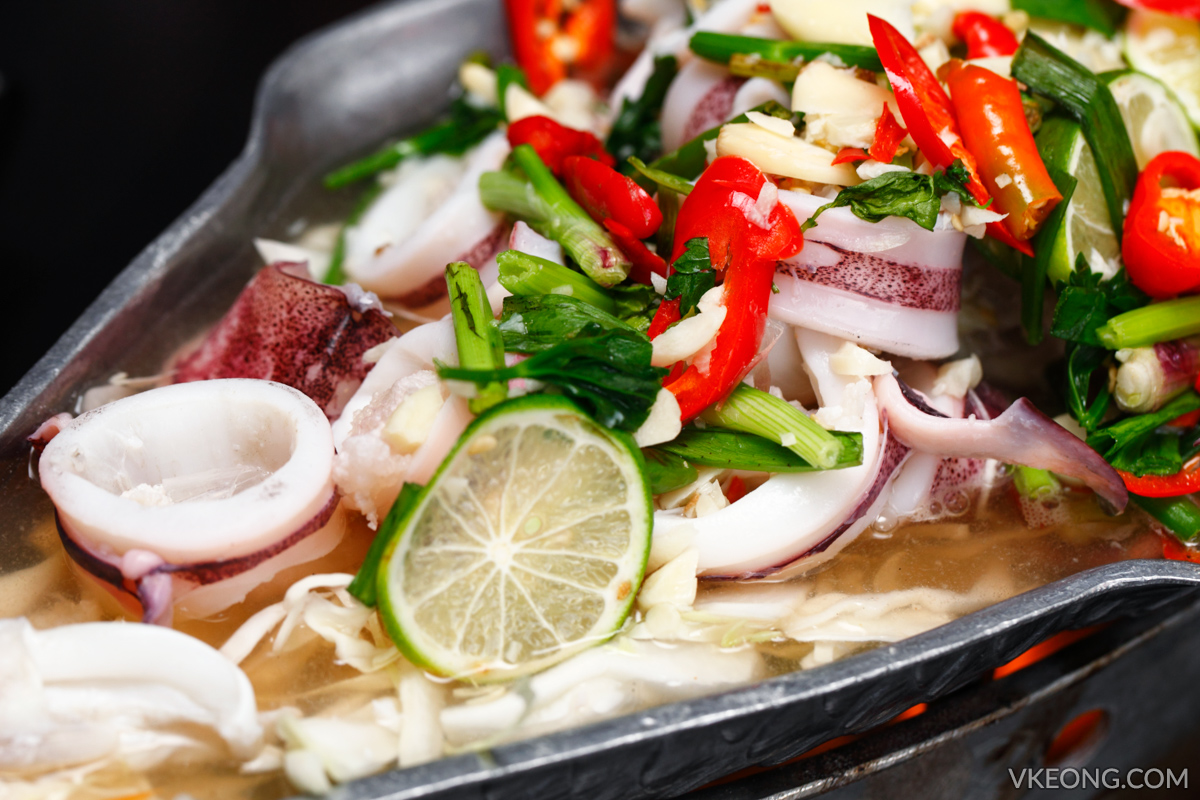 Soi 55’s signature steamed fish uses tilapia which we didn’t fancy, so we settled for the squid version instead. The Steamed Squid with Garlic and Lime @ RM30 was shockingly huge in portion size, far larger than what expected to see from the menu’s photo. Not that we are complaining though.It’s also not as spicy and pungent as it looks, so if you prefer a spicier version just let the staff know when ordering. 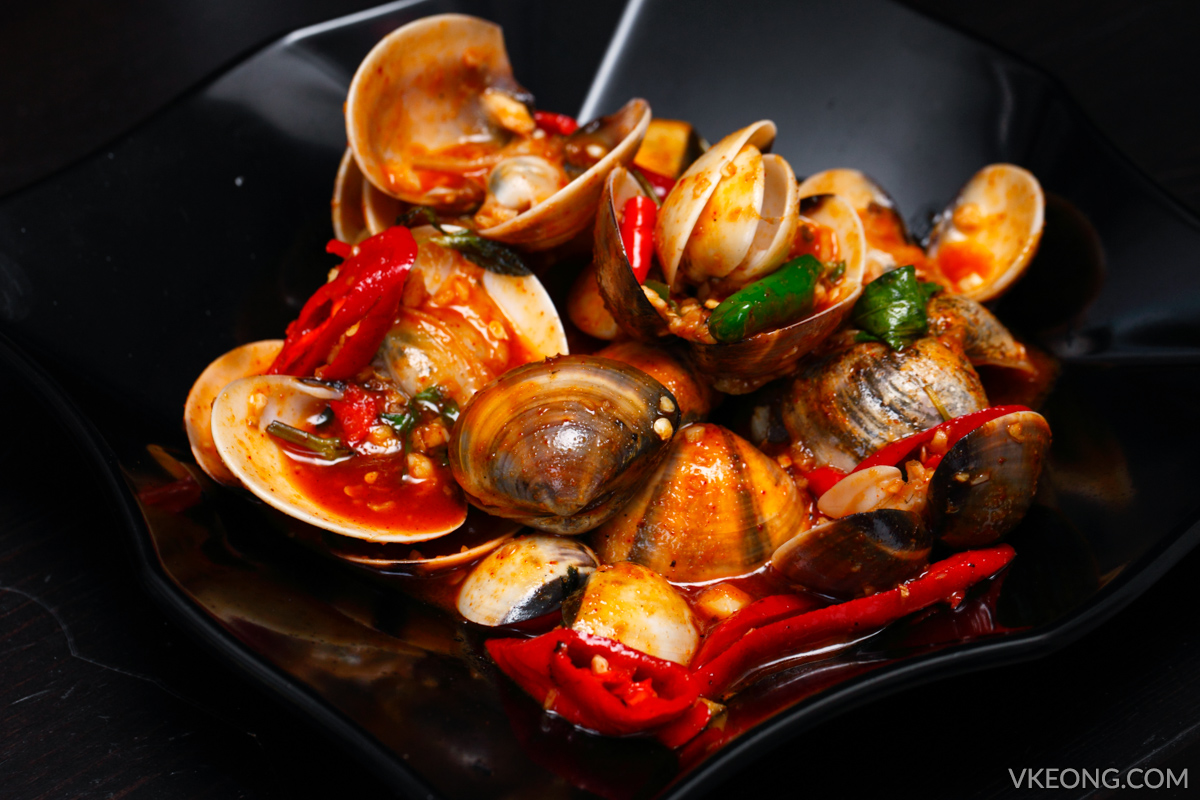 Stir Fried La La with Roasted Chilli @ RM22 – the clams were fat, fresh and cooked just right and that’s really all that mattered. The savory sauce had a nice basil sweetness that adds a distinctive layer of flavor to it. 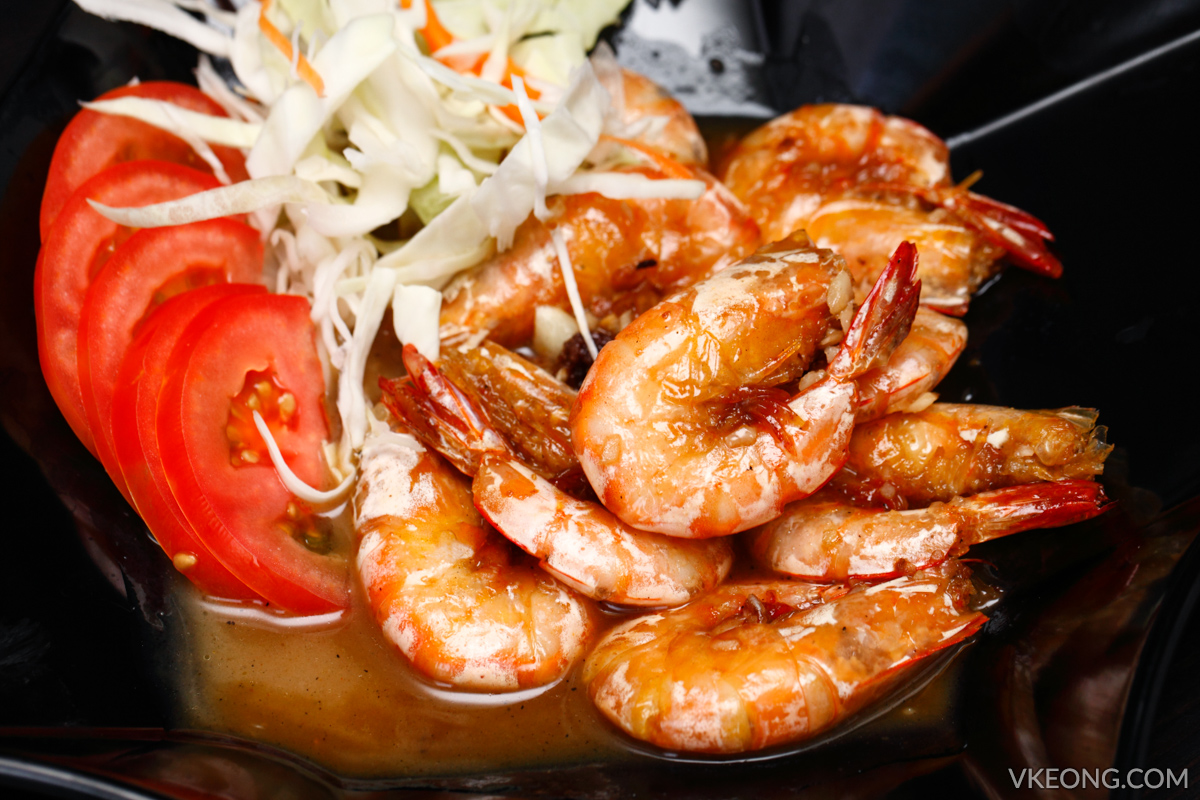 We took a gamble with the Deep Fried Prawns with Tamarind @ RM25 and it paid off. The tartness of the tamarind complemented the sweetness of the prawns very well. 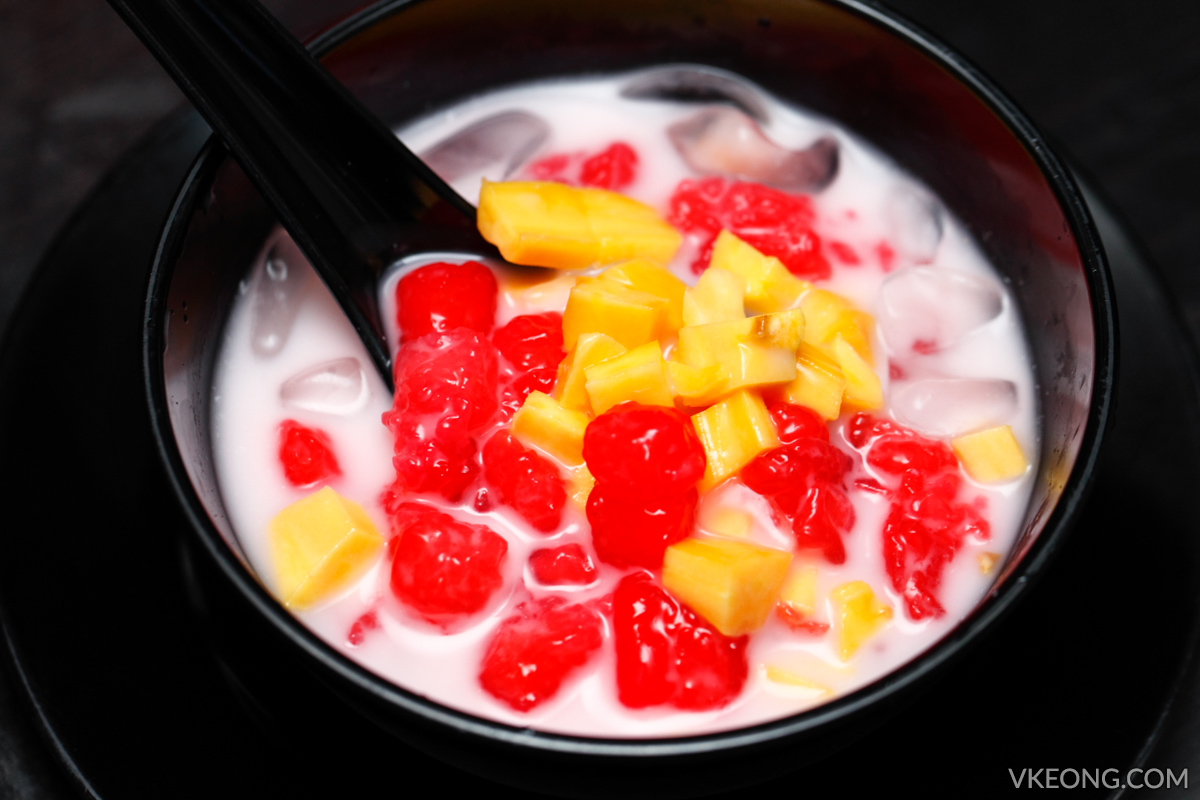 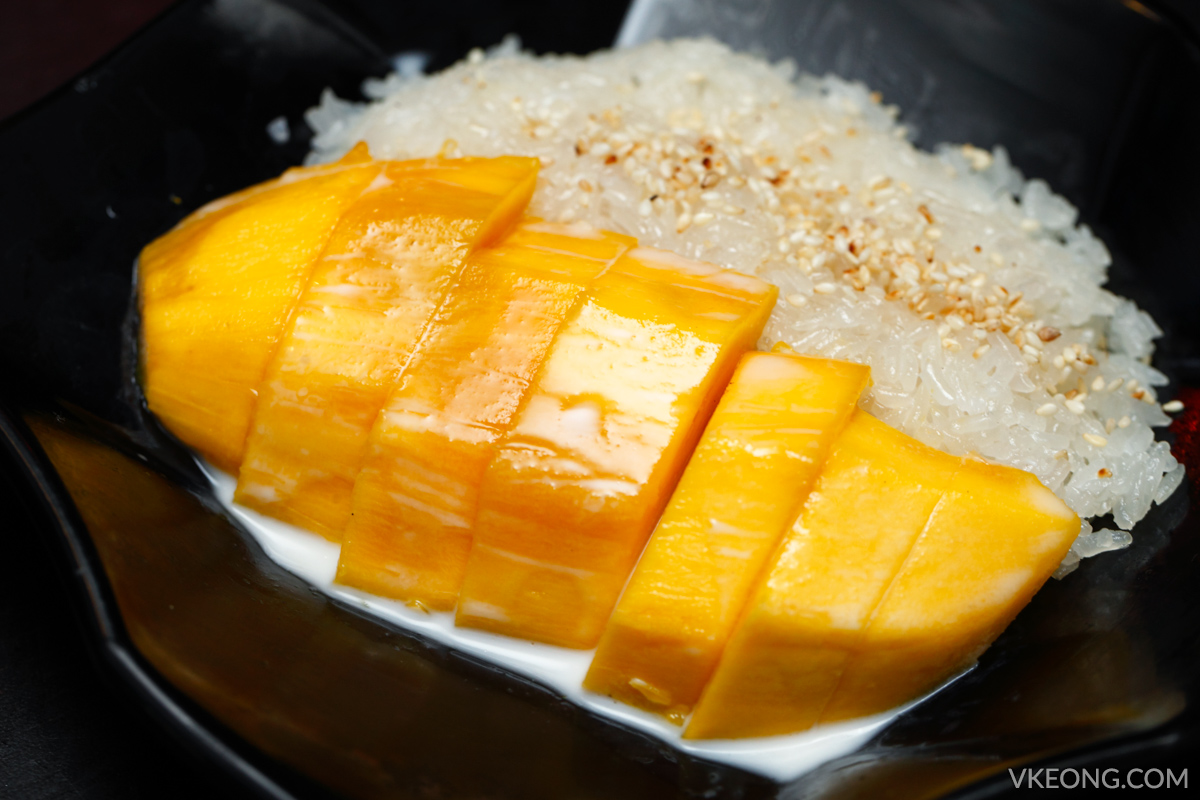 For desserts you can expect the usual suspects like Tub Tim Krob @ RM5, Mango Sticky Rice @ RM10 and a couple of others like sea coconut jelly and red bean in coconut milk. Both desserts we had tasted as expected and we were pleased by the generous amount of red rubies and jack fruit given for the Tub Tim Krob. 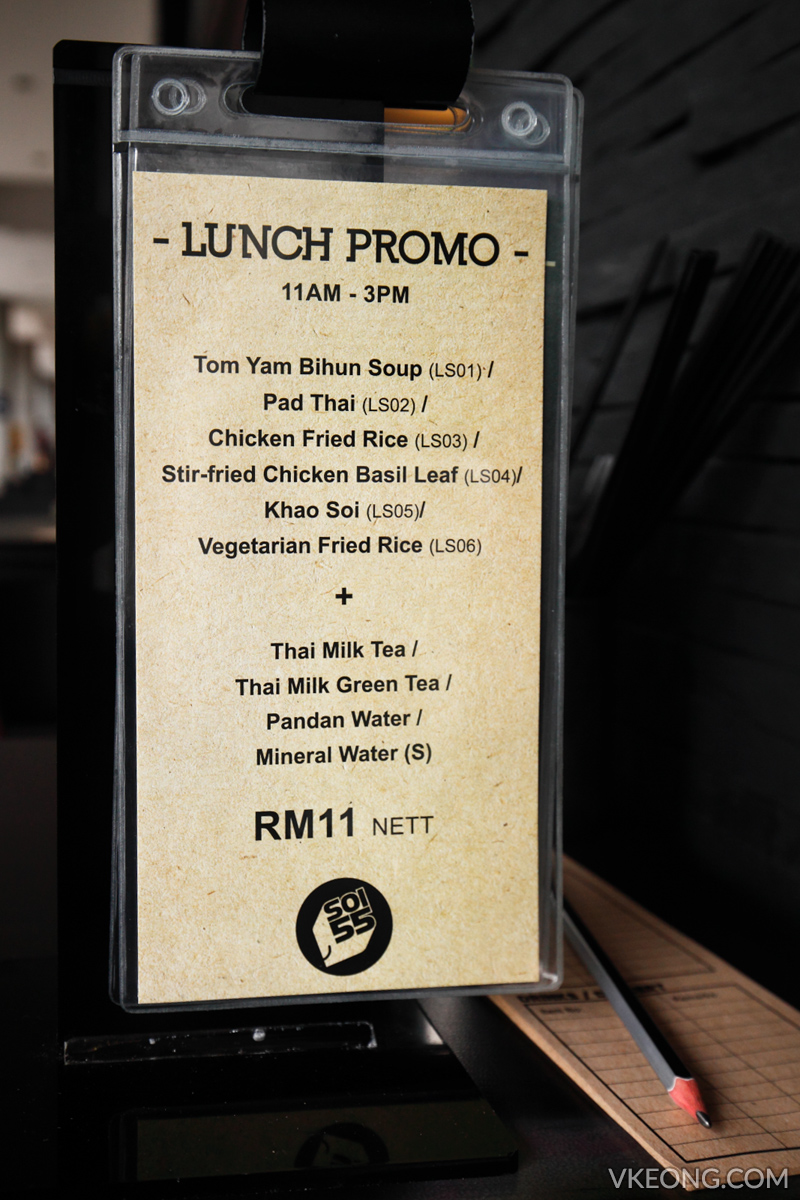 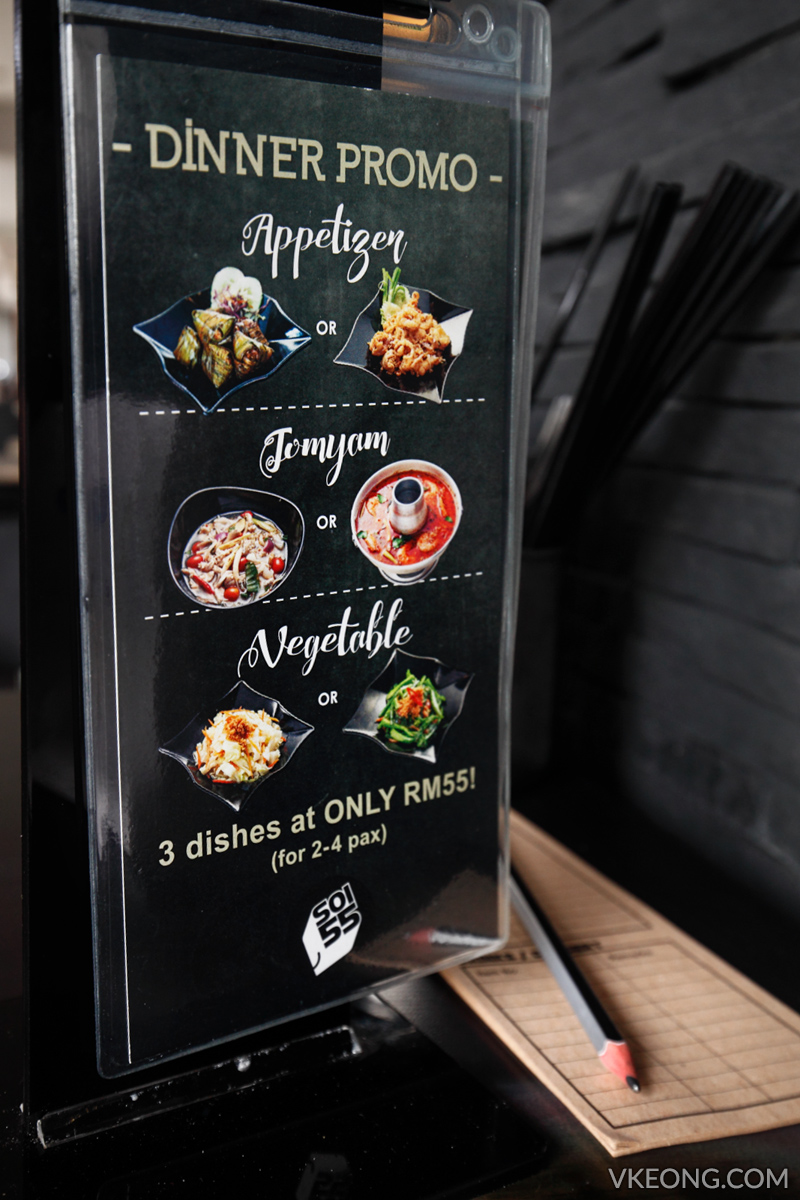 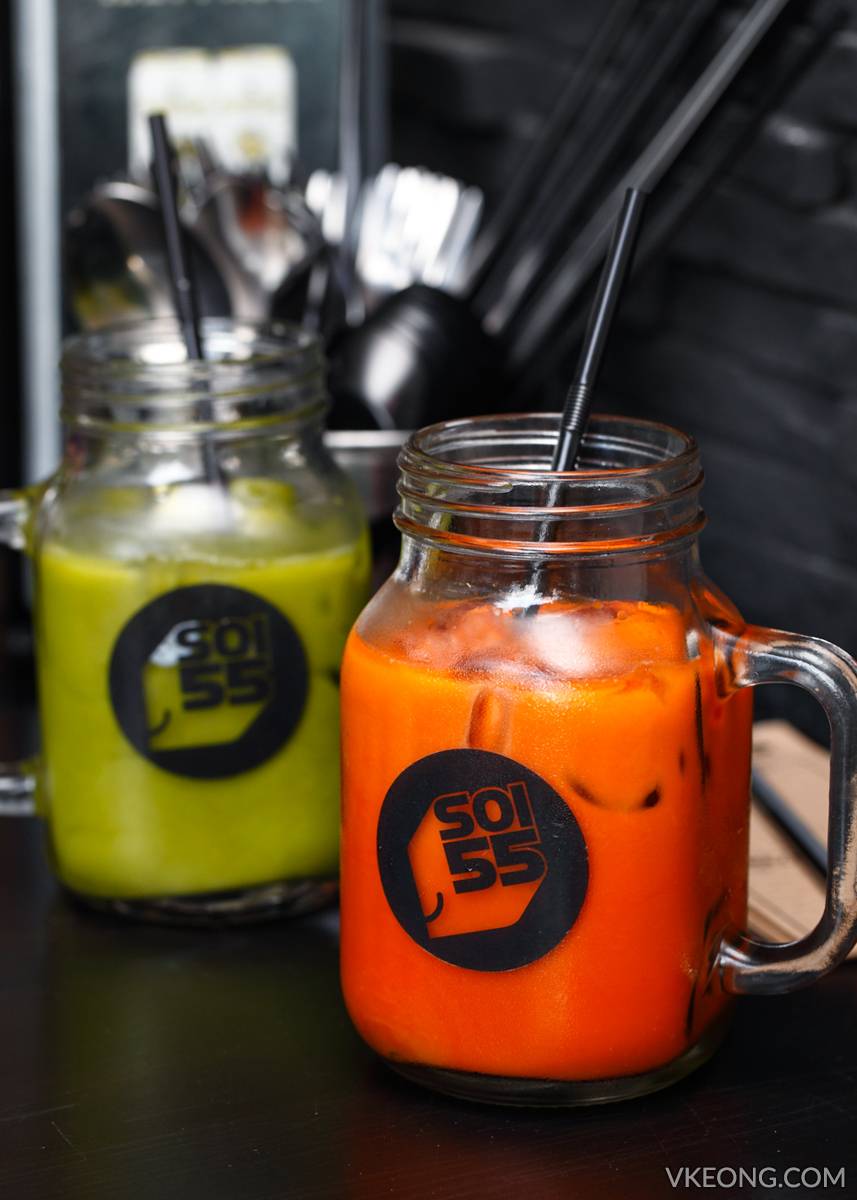 Here are Soi 55’s lunch and dinner promos. For RM11 nett you get a single portion noodle or rice with a drink. If you are dropping by for dinner it’s RM55 nett for 3 dishes (appetizer, main dish and vegetable) and the serving size is enough to be shared among 3 to 4 pax. Not bad at all if you ask me. 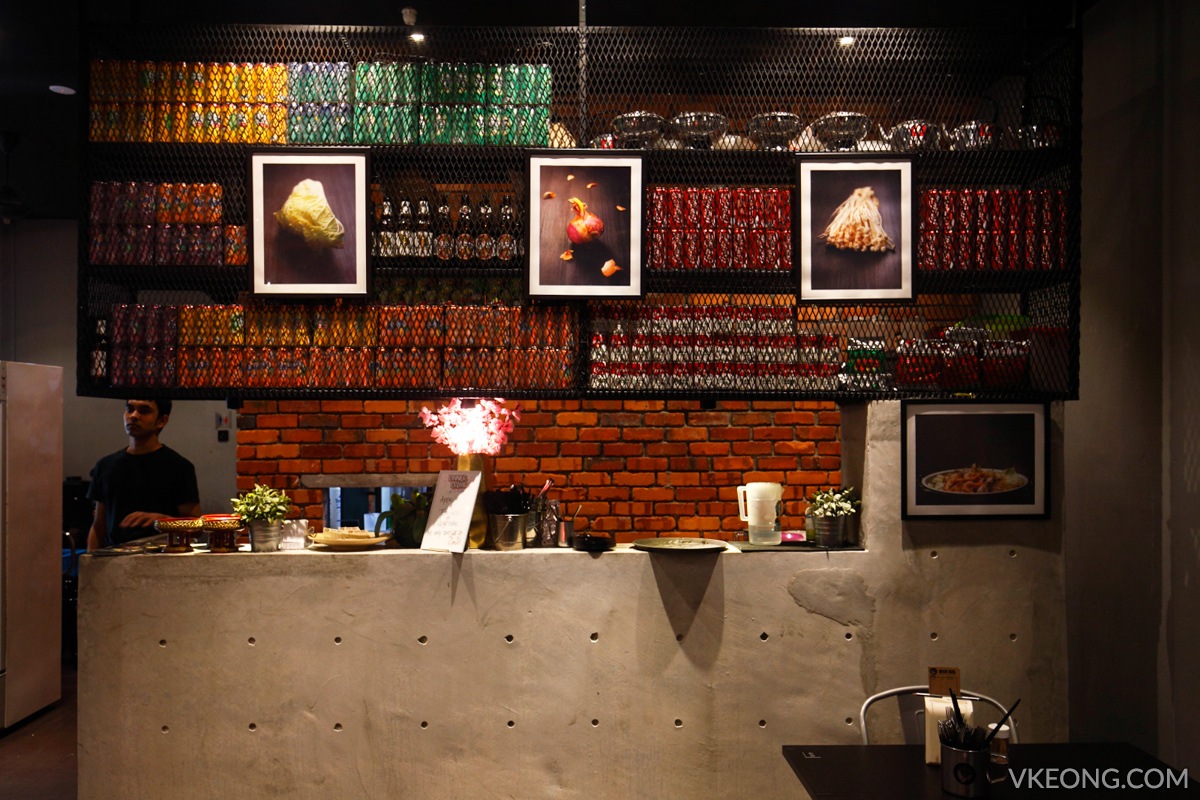 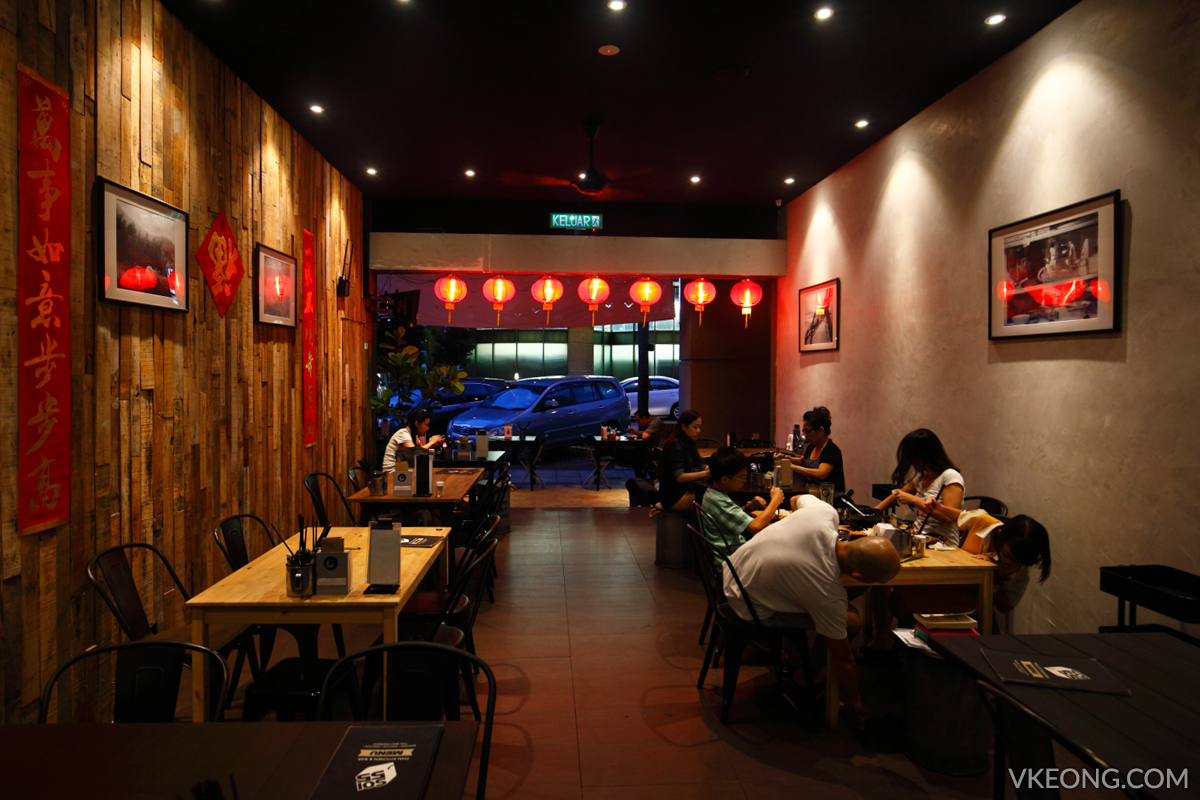