My birthday was two weekends ago and we went to Stadt Restaurant to celebrate it via a simple dinner. Stadt is a German Cuisine & Bistro which was brought to my attention by one of my readers – Khor after he read my post about Ingolf Kneipe.
Actually, I was already here even before my birthday about 6 months ago when I just started working in Cyberjaya. I didn’t blog about it until now because I wanted to try more dishes. But, that didn’t turn out as expected, you will know why later lol. Stadt’s menu is very extensive with various types of meat available like pork, chicken, lamb and seafood. Just for your information, grilled items have a minimum 25 minutes waiting time. And if you are a drinker then you’d be glad to know Stadt also serves imported German beers. I heard the best way to enjoy German cuisine is by having beer, lots of it lol.
Anyway, the first time we were here (6 months ago), we ordered the German Pork Chop which was RM19.90 that time. And for my birthday meal, we ordered the same thing again! We completely forgotten that we already tried the dish before, lol. Seems like the pork chop has a unique charm, eh?
Besides having a different look, the price has increased RM3 to RM22.90.(caused by the petrol price increase and inflation?) Well, I didn’t mind it at all because it’s still reasonable and there’s more side dishes given too.
I remembered the first time we had the pork chop, we felt it was a bit hard tasted a bit bland. This time, the dish improved with the meat being more tender and the brown sauce tasted better too. Besides the pork chop, the German Bratwurst’s (sausage) price have increased as well. The double sausage used to cost RM15.90, it was such a steal. But now, a single sausage order alone would cost RM17.90 already. This was what we had the first time. Never mind the price increase, the German Sausage is still a great dish – comparable to Ingolf Kneipe’s standard.
Apart from being longer and thicker than the ordinary sausages, German sausages pack a nicer and bouncier texture. A must try in German cuisine. Orange Citric Freeze @ RM8.90. Really gave me a temporary brain freeze when I drank it too fast, lol. A nice drink except I didn’t taste any orange in it, just a whole lot of vanilla flavor. Thanks to Khor for the nice recommendation. He was right about Stadt’s food being really good and reasonably priced. I had absolutely no regrets dining here.
This is a restaurant I would definitely return again in the future to sample the other dishes especially the German Pork Knuckle. I kinda regretted not ordering it after seeing the dish being served to almost every table. It looked damn delicious!


Other photos for your viewing pleasure: 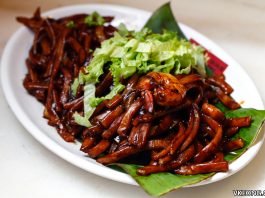 Chinese Food October 16, 2016
ABOUT US
VKEONG.COM - Malaysia Food and Travel blog with reviews of restaurants, hawker and street food in KL, Penang, Melaka and beyond.
Contact us: vkeong@yahoo.com
FOLLOW US
© VKEONG.COM - All Rights Reserved