Suzi’s Corner is a hawker food court made up by several stalls under one roof. You can find satay, roti canai, otak-otak, BBQ chicken wings and even steaks here. The steak hut has to be the most popular one around and judging by the number of expats dining here, I would say they are the main target customer group. According to the many good reviews posted online, apparently this place is a gem where you would find the ‘cheapest and best steak’ in KL. Well, lets see about that shall we. For steaks, there are seven types to choose from with Sizzling Tenderloin Steak being the most expensive one @ RM32. If you look at the pricing, yes it is very cheap, so cheap that it is almost half the the price of a normal steakhouse. And the portion is not small either, comes with decent amount of fries and greens too. Since the steak comes on a sizzling hot plate (it is really sizzling, so hot it would burn your hand) the steak is still being cooked/fried as long as it is sitting on it. So if you ordered your steak medium rare, it would get cooked to medium well, then well done eventually. That was exactly what happened to my steak. Shown above is the steak when it just arrived, still medium rare as you could see from the succulent reddish-pink center. Minutes later it was just a dry and rubbery slab of protein. If not for the brown sauce I would find it quite difficult to finish the steak. The same thing happened to the Ribeye Steak @ RM29. But luckily it wasn’t as bad as the tenderloin earlier because it is fatter, hence able to offset the dry texture. So I think the Ribeye would be a better bet here. We tried two soups – Onion Soup and Mushroom Soup @ RM5 each. They were nothing special but at least the fluffy buns that came together are quite nice. Although you could get cheap steaks here, the quality is far from impressive. Simply put, you get what you pay for – it is only fair. Honestly if you ask me, I would only recommend the Steak Hut to those who are really craving for meat. But for those who are serious about their steaks and willing to spend a little more, Suzi’s Corner should be on the low priority list. 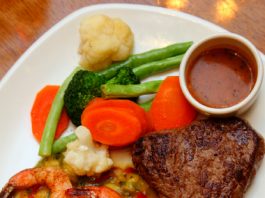 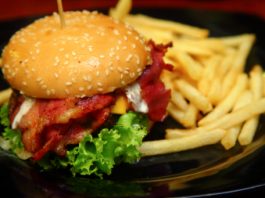 Burger January 5, 2015
ABOUT US
VKEONG.COM - Malaysia Food and Travel blog with reviews of restaurants, hawker and street food in KL, Penang, Melaka and beyond.
Contact us: vkeong@yahoo.com
FOLLOW US
© VKEONG.COM - All Rights Reserved