Remember Swee Guan Hokkien Mee at Geylang Lorong 29 that I didn’t get to try because it wasn’t open yet when I went there the last time? Because of that we had to try the one at VivoCity’s food court instead, which was something regretful for me.
Well since I am working in Singapore now I have plenty of opportunities to make another visit, and I did that just last week. I was 100% sure it would be open at night, and I was right. I went with my colleague, who claimed that he has never tried any Fried Hokkien Prawn Mee in Singapore before despite working here for almost 2 years. His reason was simple, it didn’t look appealing or appetizing enough to him. But still, I managed to convince him to give it a try because this is one of the food you must try in Singapore.
Although there weren’t many customers when we arrived, it still took quite some time for the Hokkien Mee to arrive. Shown here is the smallest portion available at an affordable $3 only. Two medium sized prawns, some squid and a dollop of sambal accompanied the noodle. Taste wise, as expected it was a lot better than the one I had at VivoCity previously. It was simply much flavorful, appetizing and had more ‘wok hei’, something important in any fried rice or noodle to distinguish between the good and normal ones.

The sambal was perfectly acceptable too, as it was thick and spicy just the way I liked it to be. I am saying this because I have tasted some really weird sambal over here, sweet and diluted that tasted like satay sauce! While Swee Guan’s Hokkien Mee itself is good, the ingredients could be improved further especially the prawns, which I feel plays an important part in this dish. Although fresh, the prawns were a bit rubbery and lacking in sweetness – clearly traits of reared freshwater prawns. If only sea caught prawns were used, the noodle would have scored higher marks for me. Besides Hokkien Mee, we also tried the satay from Kwong Satay, a stall located just next to Swee Guan. Premium Pork Belly Satay @ $1 each is their specialty, which I only knew before we left the place, too bad.
This was actually my first time having pork satay, as it is quite rare in Malaysia for the obvious reasons. I gotta say it’s really tasty and far exceeded my expectations. I wasn’t having much hope at first because the satay I had in Lau Pa Sat a few days earlier was a disaster – the meat had no texture at all and the peanut sauce was super oily. The primary reason I liked Kwong Satay so much is because it tasted very similar those in Malaysia. Each stick of satay is priced at $0.40 each, a slight increase from the old price of $0.35. Being affordable and delicious, it easily became one of the bests satay I have had so far.
And if you look carefully, each skewer of pork satay is actually made of 2 parts meat and 1 part fat (in the middle), nice distribution for a bite. We ordered only 10 sticks initially just for the sake of trying but ended up having another batch lol. 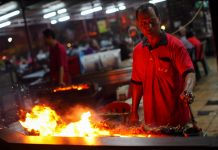