Kepong used to have quite a number of HK-style dessert restaurants which were mostly concentrated in Laman Rimbunan. Among the tens of dessert and bubble tea shops that opened and closed within the said vicinity over the years, Sweet Hut is the only dessert house still standing. That says a lot about their competitiveness and what I feel is even better, is knowing that Sweet Hut is actually a local brand. Malaysia boleh! 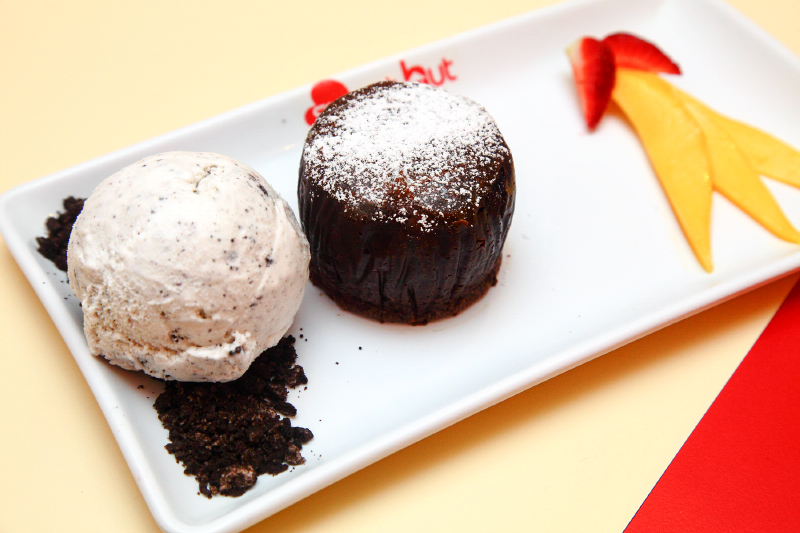 To be honest, the decor at Sweet Hut’s Kepong branch might feel dated to some – especially when compared to the more hip eateries mushrooming in the city. But let’s focus on the more important thing on hand, which is the quality of the food.
The Baked Marquis Chocolate Pudding with Cookies Ice Cream RM10.80 is a must order at Sweet Hut, and even more so considering it tasted better than what I had in Hong Kong. It takes 15 minutes to prepare this decadent signature dish of theirs and some skills are required to make a perfect gooey centre. Bake it for too long and the whole pudding would solidify into a brownie while too short would result in a runny chocolate centre.
The chocolate flavour was quite intense too since they are using 56% Belgium dark chocolate. The portion was good enough to be shared at least between two but any true chocolate lover would be able to finish the entire dessert on his/her own. 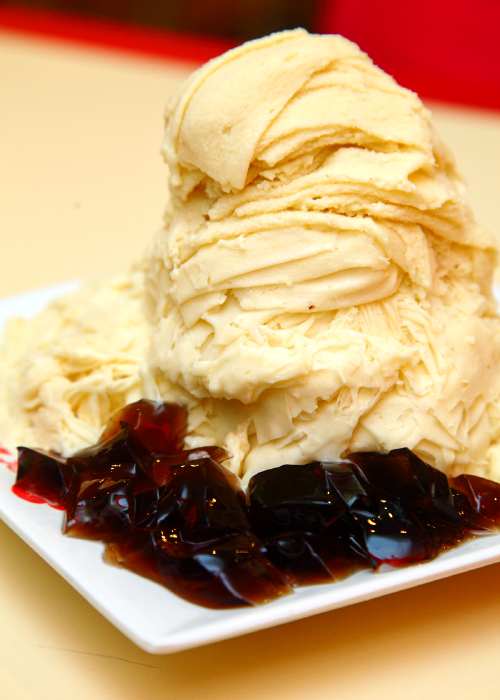 If you are durian lover I am sure you’d appreciate Sweet Hut’s D24 Durian Snow Ice @ 10.90. Judging by its strong durian aroma and thick consistency, the amount of durian flesh they used to make this snow ice was quite a lot. The quality of the frozen durian flesh used here is one of the better ones. I know that because I myself used to supply frozen durian flesh and sell ice-blended durian beverages. 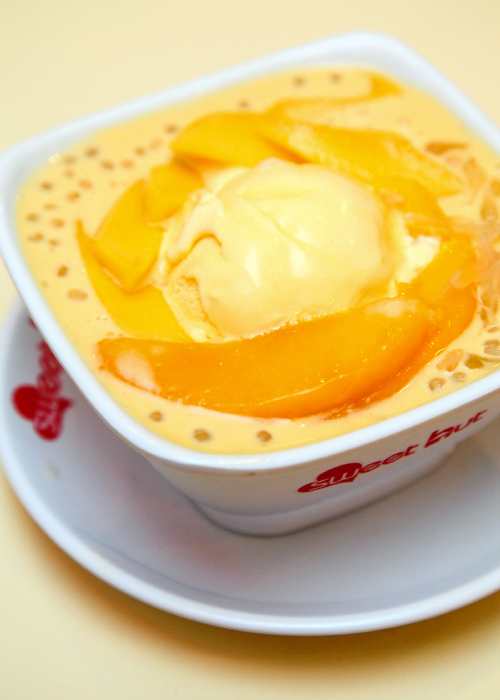 And what’s a dessert house without mango sago? There’s plenty of choices and different upgrades available for this comforting dessert but we stuck to the best seller – Fresh Mango Sago Pomelo Soup with Mango Ice-Cream and Coconut Pudding RM8.90. Personally, there’s nothing to complain about this ‘soup’ because it was wonderful and hit all my spots. The addition of coconut pudding (or jelly?) was a nice touch for a refreshing taste and chewiness. 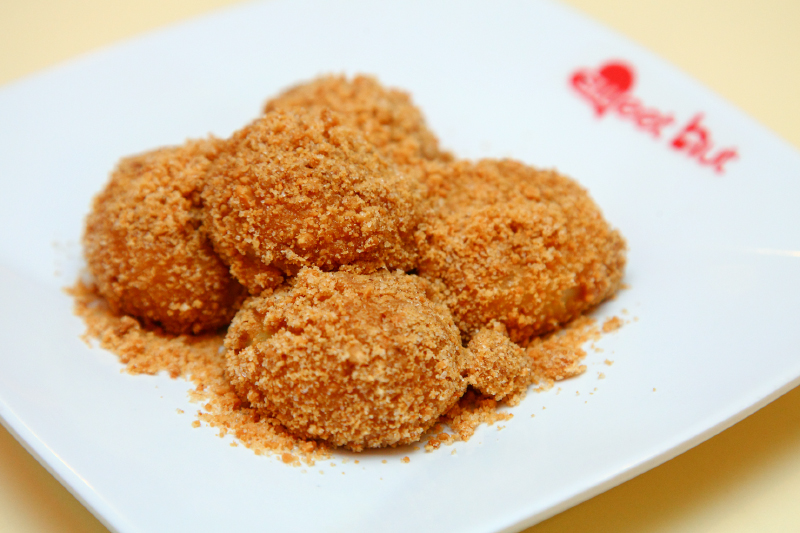 The Little Glutinous Peanut Balls RM6.80 did not disappoint either. Although the chewy mochi balls are larger than what you’d get at other places, the amount of gooey peanut butter filling was great. Biting into one of these gives you a burst of peanut flavour, nice. 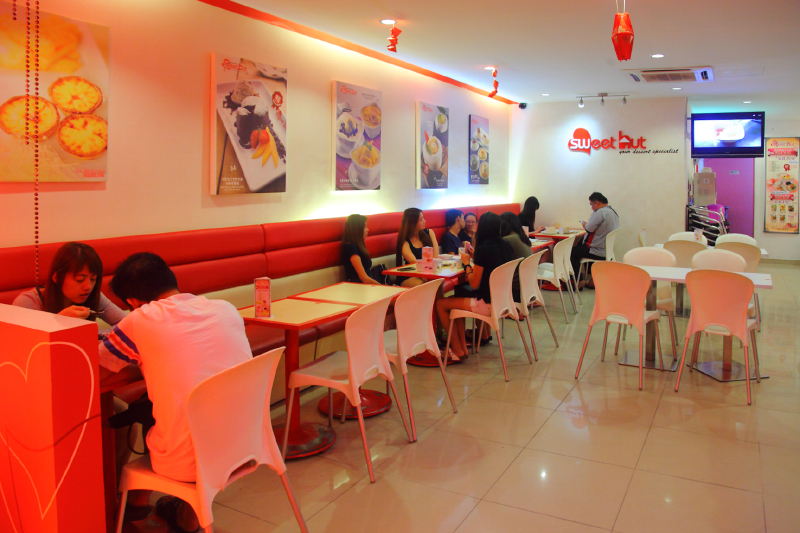 Based on the few desserts we sampled, we were very satisfied with the overall experience at Sweet Hut. Now I know where to go for desserts in Kepong when the sudden craving hits us.
Besides desserts, they also serve a couple of simple Western dishes and snacks such as burger and chicken chop. It’s a shame though that they do not serve local desserts such as bubur chacha and wheat porridge dessert. Anyway, from what I was told, Sweet Hut will expand their “real food” menu soon to provide more choices to the lunch and dinner crowd – as requested by their loyal customers. 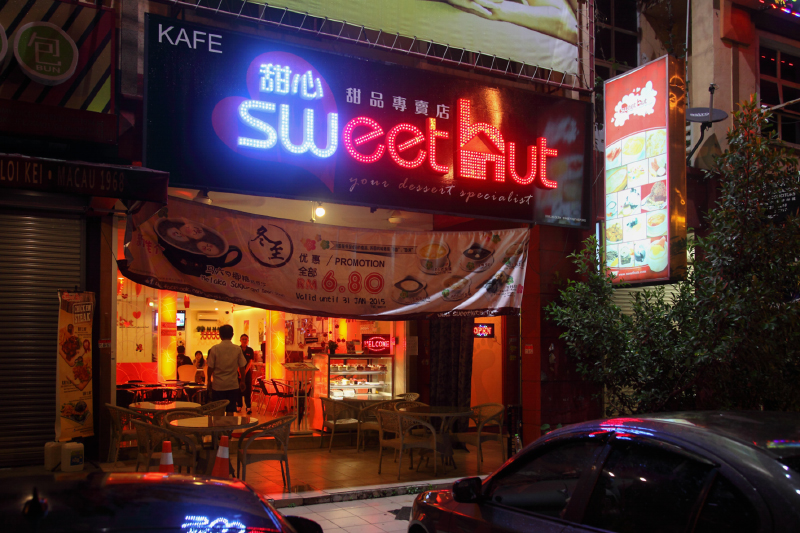