Heeding recommendations from my colleagues, I decided to try a restaurant in Butterworth hailed to serve dim sum better than Penang island. The exact location of the restaurant was unclear to me so I spent half an hour looking for it. Prior to that I only knew it was behind HSBC and the police station..

“Sweet Paradise” 超全 Dim Sum Restaurant is located opposite Pasar Sri Bandar in Bagan Baru, Butterworth. For a dim sum restaurant it is certainly huge, able to accomodate at least 60-70 people at any time.

One will need to get their dim sum from a counter which is manned by a guy who looks so alike to Jackie Chan’s son.. Jaycee. He had posed but I was too busy taking other pictures, and when I really wanted to take his photo, he was too shy already lol. Nice guy la, re-heated my dim sum when I asked him to :)

Besides steamed dim sum, pastries and fried dim sum are up for grabs. The egg tarts certainly looked nice and crispy :drool:

Almost all the dim sum served had prawns in them.. From the top, L-R: Minced meat/vegetable on dried seaweed, Har Kao, 3 different siu mai in a small bowl, Minced meat wrapped in dried seaweed, Seafood tofu topped siumai and clams. FYI the clam shells were not re-used, because they really contained clam flesh. Among all, what I liked most was the Har Kao, the prawns were really juicy and fresh, definitely the best I have tasted so far. The bill was surprisingly cheap, RM22 inclusive of a pot of tea. 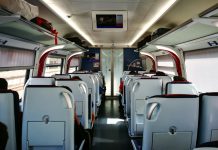