Chinese style buffet could be the least popular type of buffet around since people usually go for Japanese, Korean or International ones. But I think Chinese buffet is something that has been overlooked and definitely worth trying at least once, especially if you could find a good restaurant that offers it.
As far as I know, currently there is only a handful of Chinese restaurants that offer ala-carte buffet and most of them are housed in hotels. In KL, you could go for Corus, Federal or Tai Zi Heen at Pullman Hotel, just to name a few. 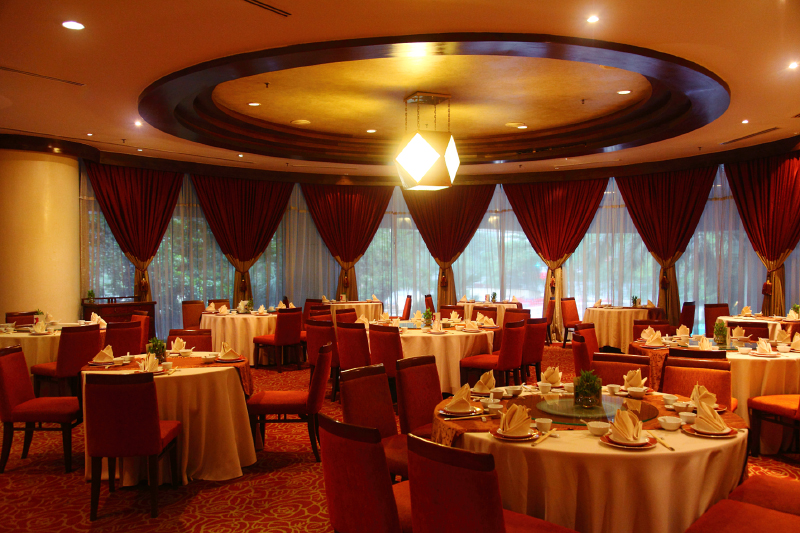 Most of the hotel restaurants provide an updated menu which could be found in their restaurant website. After studying a few, we decided to go for Tai Zi Heen at Pullman Hotel Kuala Lumpur because the selection looks more appetizing than the rest. Well, at least from what we saw.
Their eat all you can dinner menu is priced at RM68++ per pax and features over 50 dishes that include a couple of dim sum too. Every dish is served in small and average portion according to what you order. So if you come in a group of three or more, you will most likely get to try most of the dishes offered in the menu. 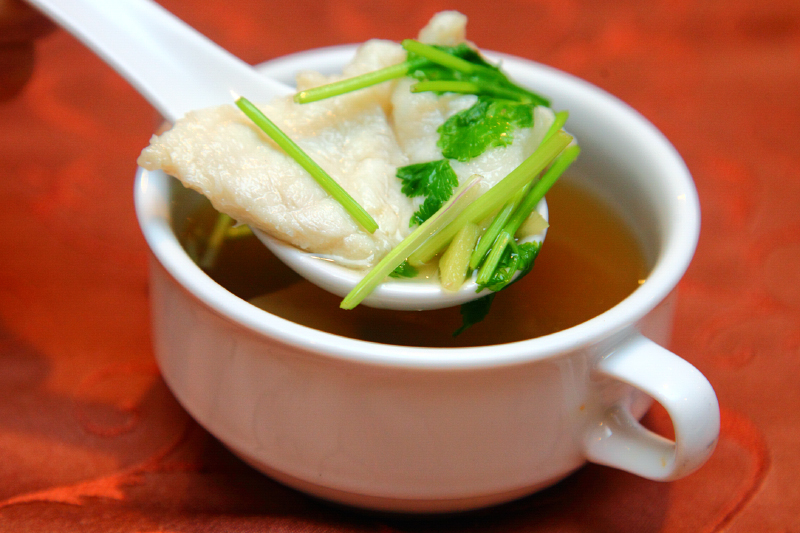 For soup, we tried the Dragon-Tiger Grouper fish soup and Chicken Consommé with sun dried scallops. Both were tasty and we actually had seconds. However, the fish soup was too salty when it was served the first time. We had it sent back and asked them to tone down the saltiness. They did and the soup came back tasting a lot better. 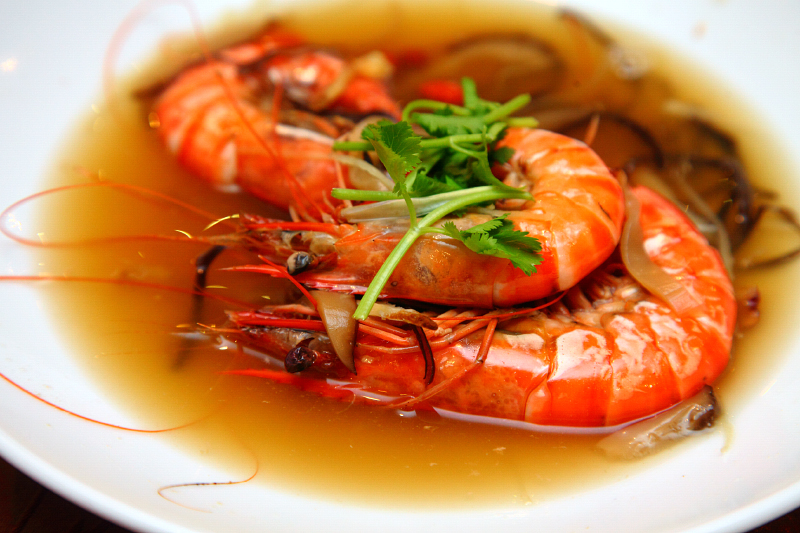 The best dish we had throughout the dinner was the Drunken Tiger Prawns with Hua Diao Wine. The prawns were superbly fresh and well-cooked. You could taste the sweetness of the prawns and the herbal soup that has an aromatic whiff of Chinese wine.
Both flavours work well together, never overpowering or distorting each other in any way. We had easily four or five helpings of this due to its deliciousness. 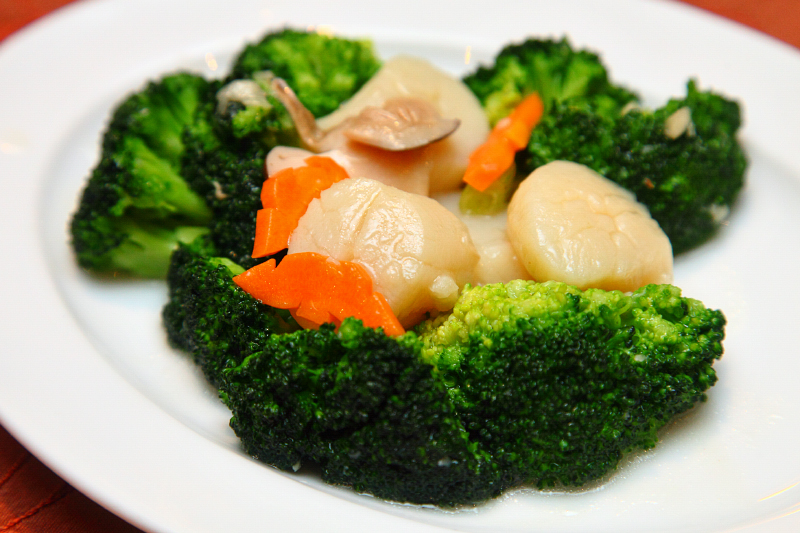 The Wok Fried Scallops with Seasonal Vegetables was another dish we enjoyed equally. Just look at the size of the sweet, plump looking scallops. Enough said. 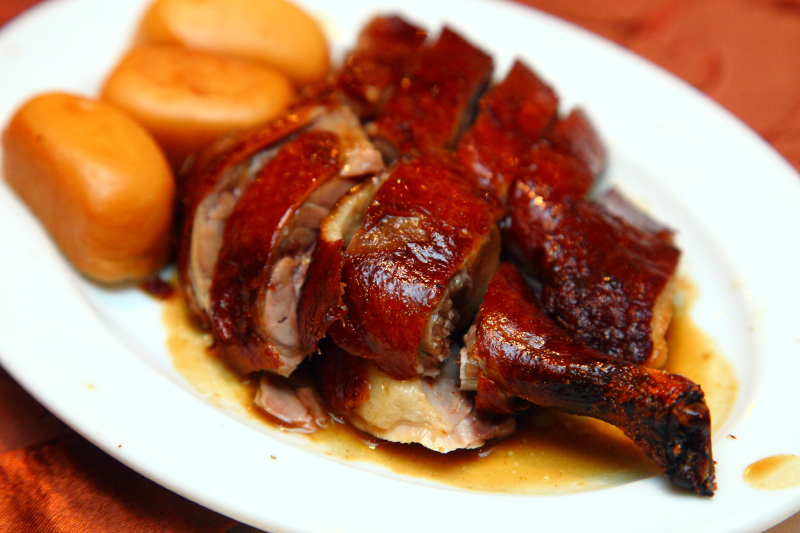 We did not expect much from the Roasted Crispy Duck but its crispy skin and juicy meat did manage to impress. If you’re a fan of roast duck, this is definitely worth ordering to try. 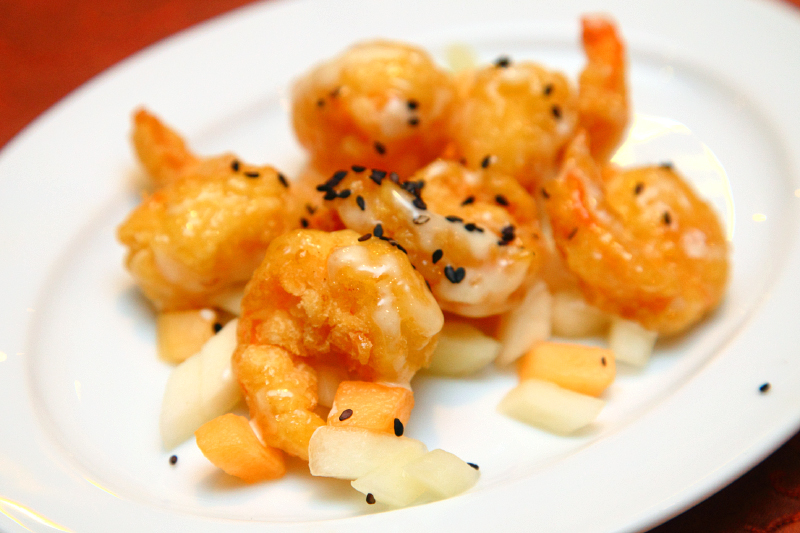 Deep-fried Prawn Salad with Honey Dew and Sesame Seeds from the appetizers menu. It was good but I’d take the drunken prawns over this any day. 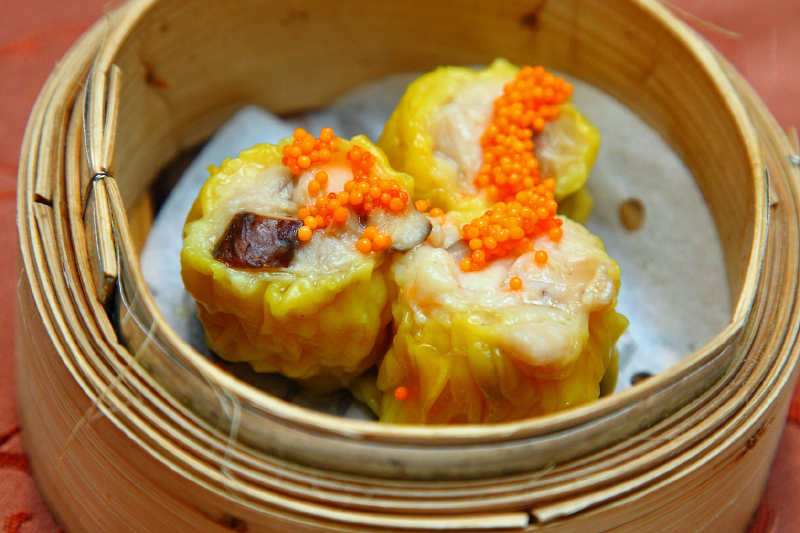 For a pork-free restaurant, the Chicken and Shrimp Siew Mai was commendable enough and tasted almost like the real deal. 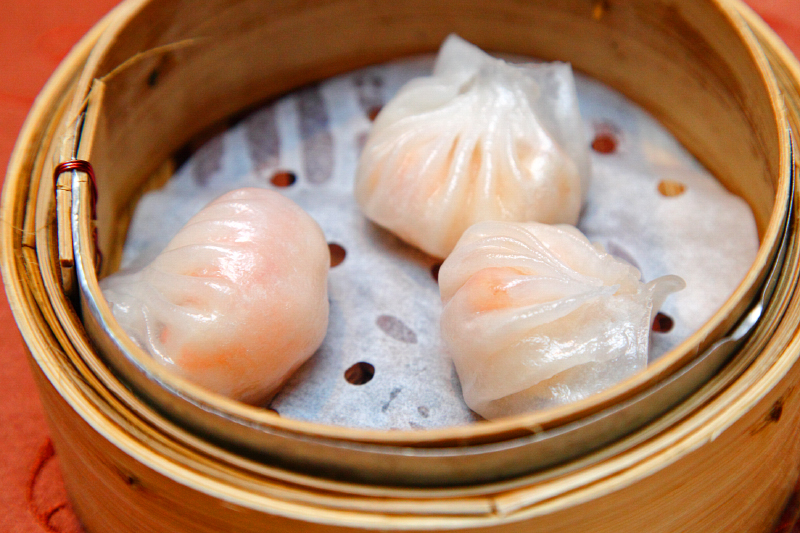 No complaints on the Crystal Dumplings (Har Kaw), it was as good as it should have been. The skin was thin yet held the succulent shrimp fillings together wonderfully well. 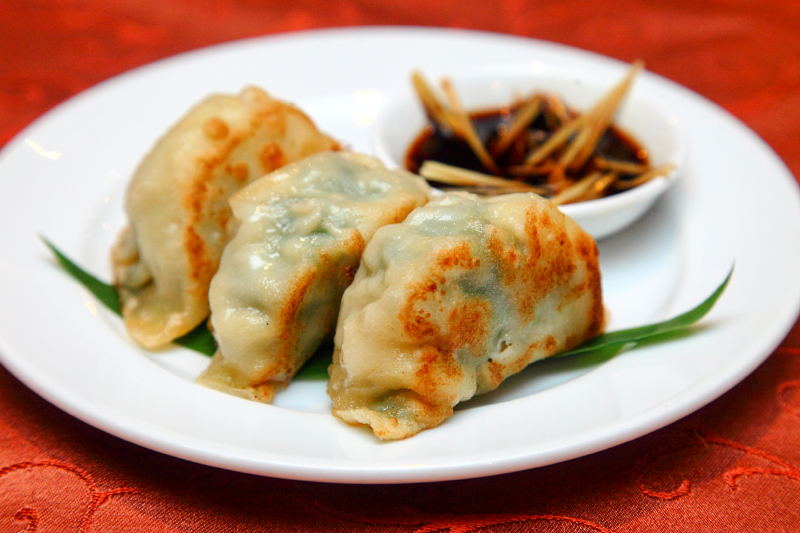 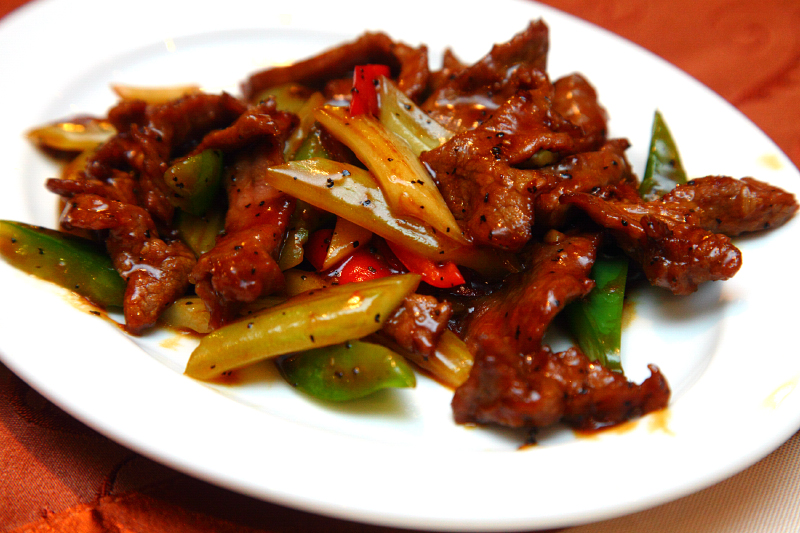 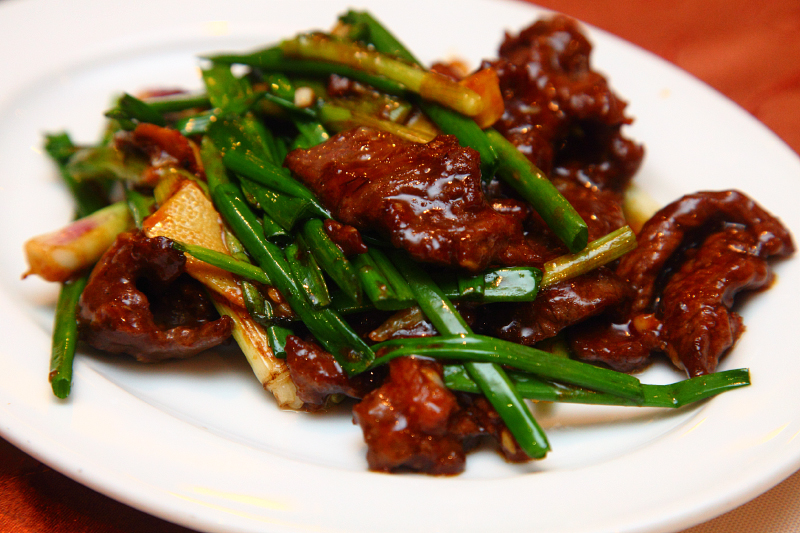 Wok Fried Venison with Ginger and Scallion – simple and homely yet wonderfully cooked. 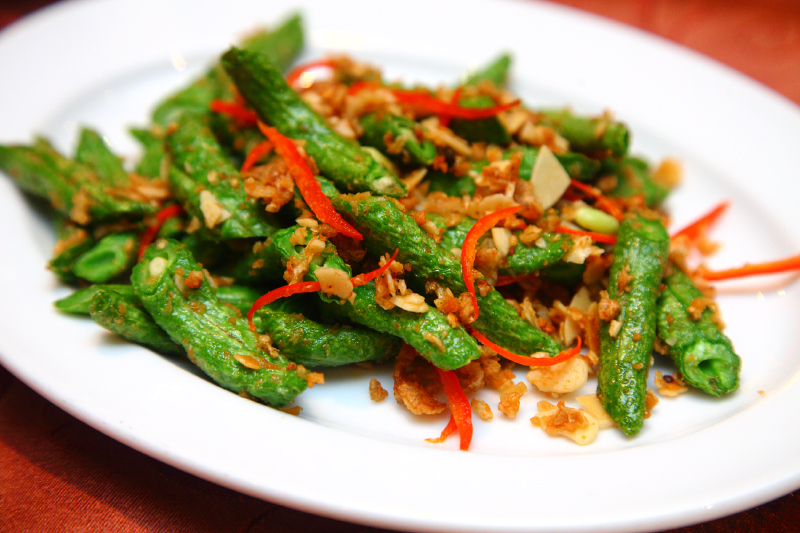 Stir Fried Snake Beans with Almond Flakes and Preserved Radish – well executed with good ‘wok hei’. We loved the mix of crunchy and crispy texture of this vegetable dish. 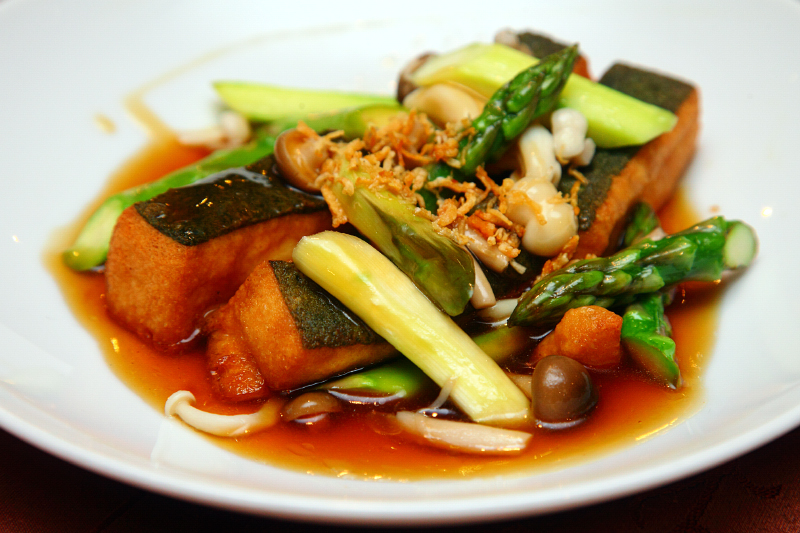 Spinach Bean Curd with Asparagus and Nameko mushrooms – the bean curd was so soft they literally melts in your mouth. Flavour wise it was slightly mellow but suits its healthy and comforting qualities. 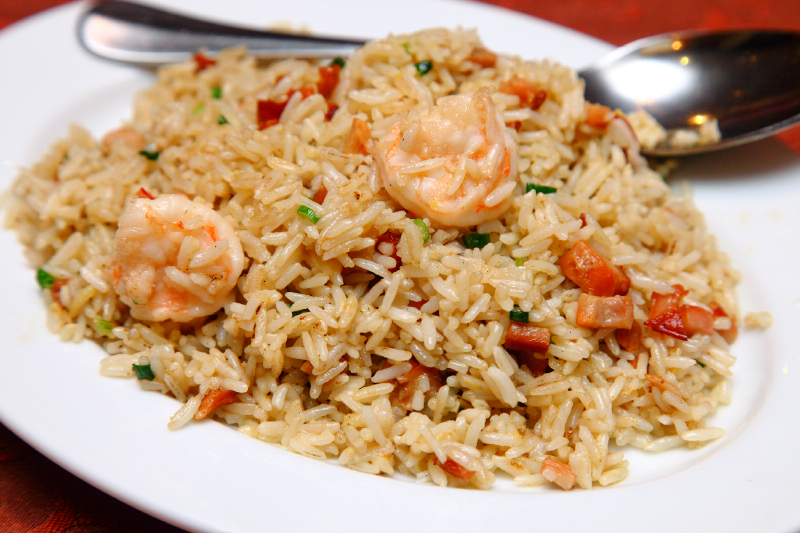 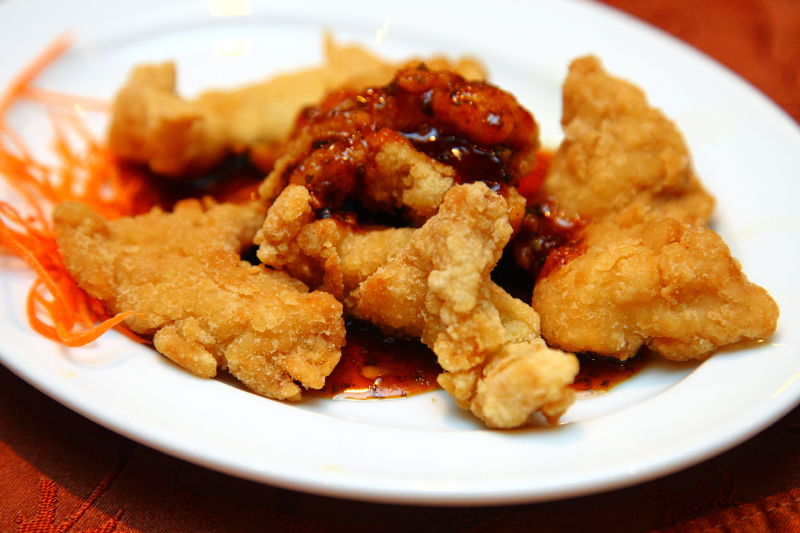 The only dishes we felt were below average were the Yang Zhou Fried Rice (top) and Deep Fried Grouper with Chilli Plum Sauce (bottom). The fried rice looked great alright but it lacked flavours and was a tad oily for us.
As for the fish, there was nothing wrong with the appetizing chilli plum sauce. Alas, the fish tasted dry and overcooked and did not have the flaky consistency we expected from a grouper. 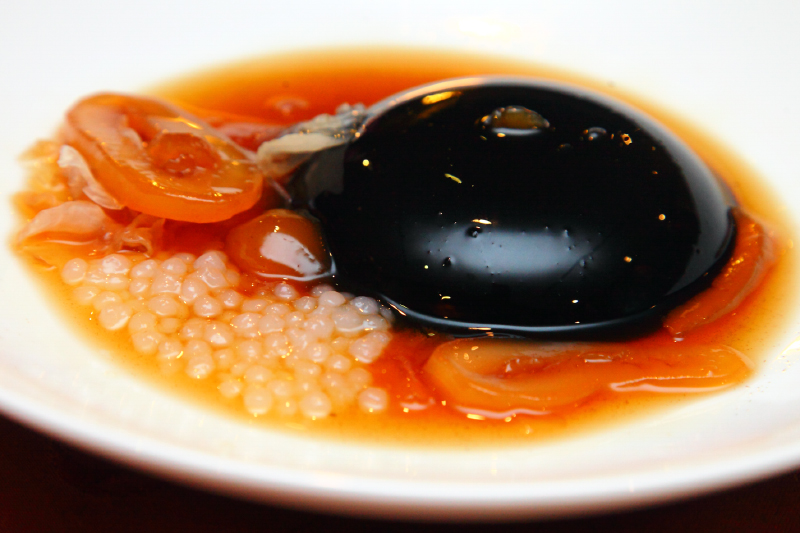 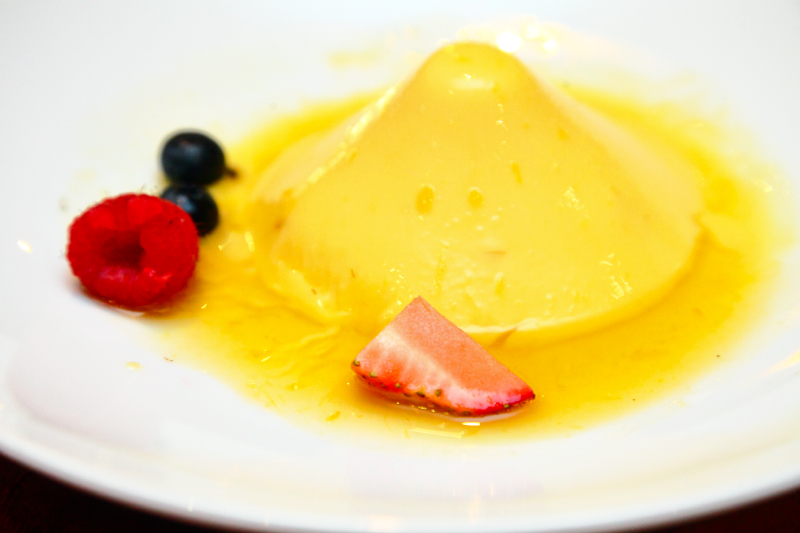 There are 6 desserts available in the menu and these are the two that stood out, both presentation and taste wise: Chinese herbal jelly with honey and chilled mango pudding with passion fruit sauce. The rest was pretty normal, in a good way. 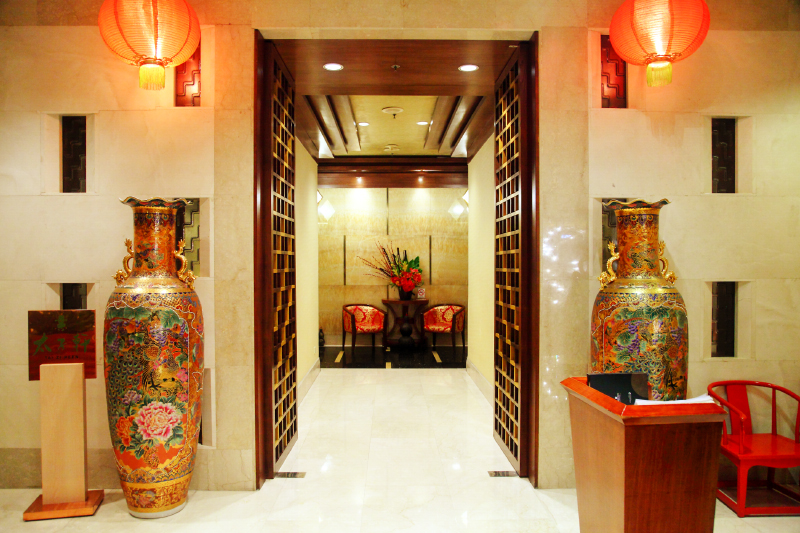 One of the best things about having ala-carte Chinese buffet is that most of the dishes served are cooked upon order. So they always arrive on your table tasting fresh and warm.
As far as the food is concerned, we were very pleased with what we had although there were a few misses. Personally, I like that the chef would stop at each table to gather the guests’ feedback and comments.