Tiffin’s by Chef Korn is a spin-off restaurant of Erawan, which is reputedly one of the best Thai restaurant in the country. But just to clarify, that’s what’s being claimed on various magazines and restaurant guides. Personally I have never been to Erawan before – I have definitely heard of it though.
Also, apology for the sucky photos. I always struggle with food served in deep plates and what you see is not a true representation of what they serve, because they look much better in real. 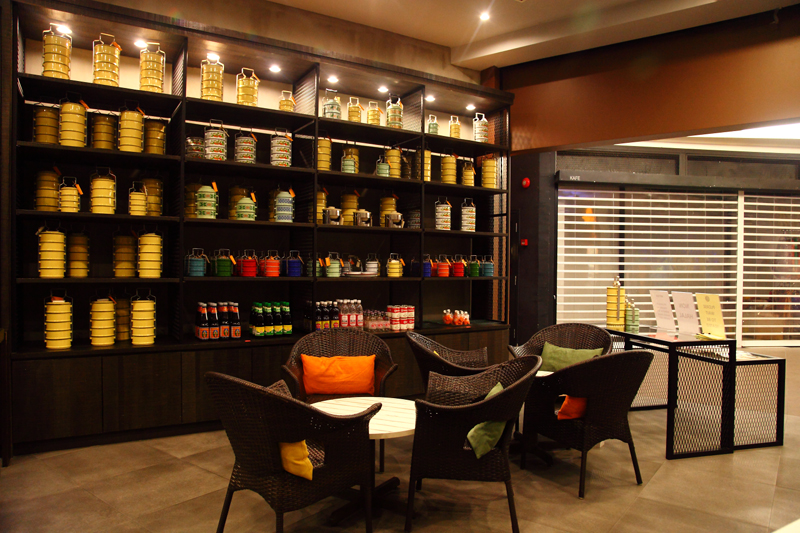 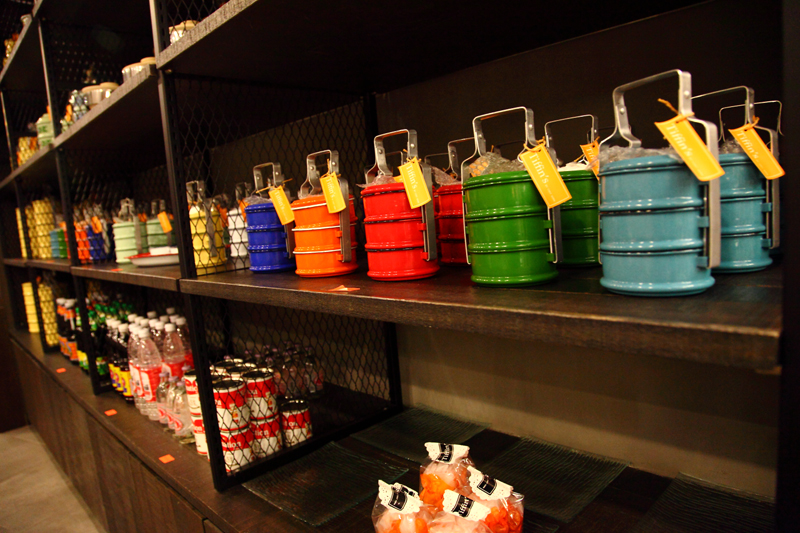 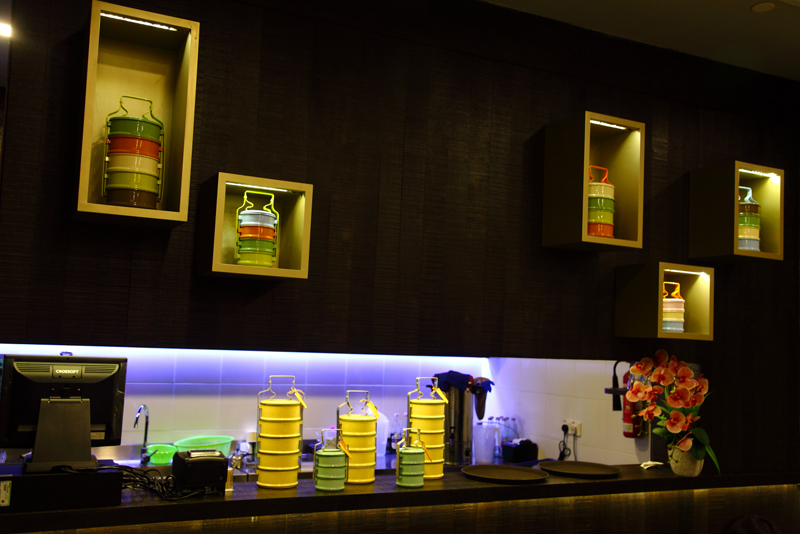 Just like the name says, Tiffin’s is decorated with colourful tiffin carriers and most of the food are also served in tiffin containers to emphasize on the restaurant’s uniqueness.
Actually, they are more than just decors because they are also for sale. The management purposely bought all these tiffin carriers from Thailand for a touch of authenticity in the experience. From what I was told, tiffin containers are quite common in the northern Thai region where people would use them to bring meals from home to work. 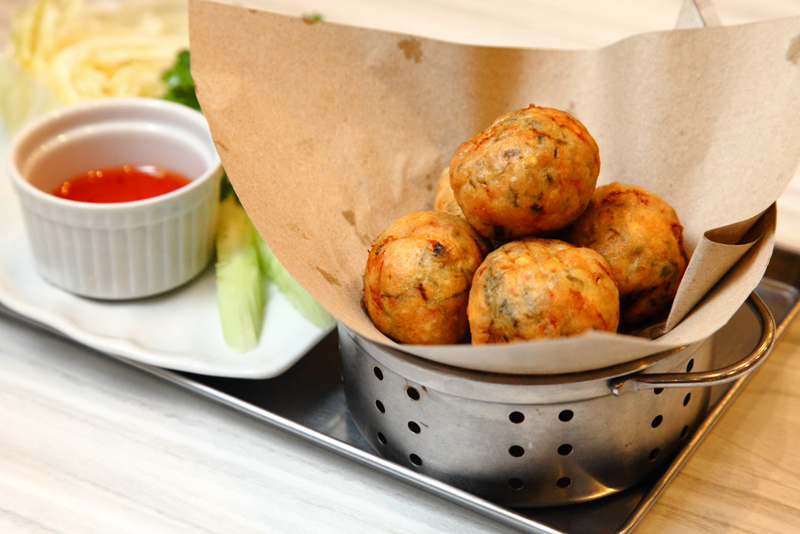 We were given a few recommended starters to kick off the meal. Fire Balls @ RM17.80 are deep fried minced pork that mixed with ground roasted rice, dried chili, vegetables and other spices for a flavourful bite. They are quite delicious and more importantly, spicy as you’d have expected from the name. The heat could be quite intense for some but for us, it was just right. 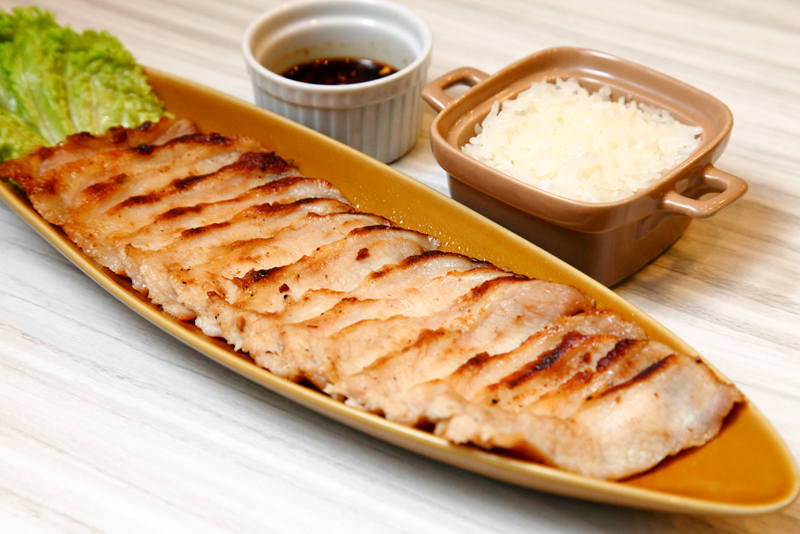 Another starter not to be missed here is the Grilled Pork Neck served with steamed glutinous rice @ RM23.80. A sweet tasting dipping sauce is given and it complements the taste of the pork nicely. When you put together a slice of the grilled pork neck on a pinch of rice, I can’t help but to think of it as a Thai version of sushi. Moreover, you are dipping it into soya sauce too. 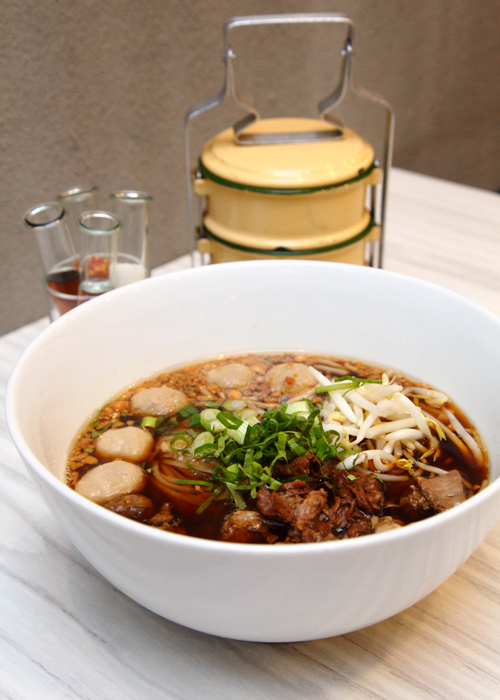 Beef Ball Noodles @ RM25.80 is a crowd favourite I can see why – everything just tasted good and worked well as a whole. There’s nothing not to like about the light yet delectable soup and tender cubes of beef. For an extra kick of flavour, four different condiments: sugar, vinegar, chili flakes and chili oil are given to spice things up if you wish. 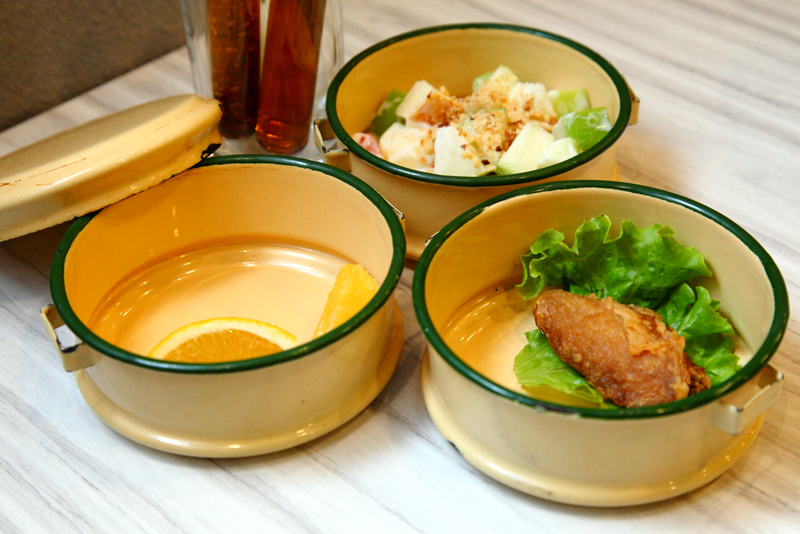 Interestingly, the beef ball noodles is a set menu so it also comes with appetizers and a salad served in tiffin carriers. Well, they were just alright. 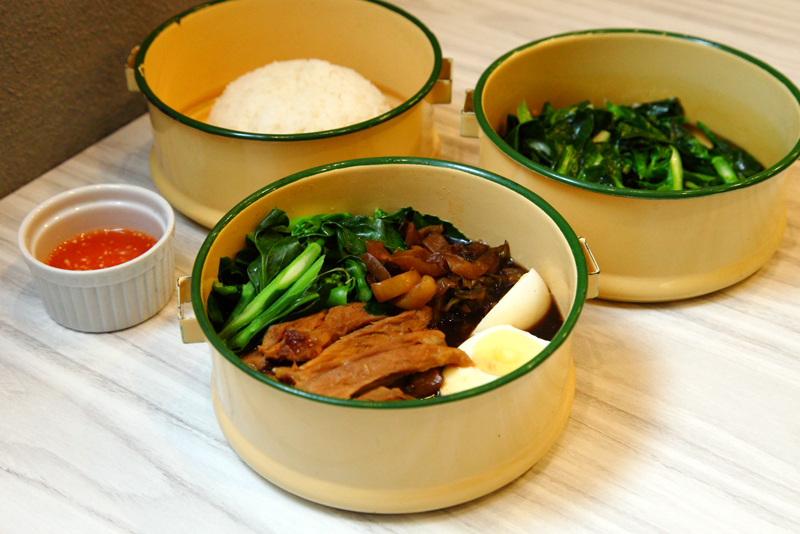 We also had a go at the ala carte Tiffin Carrier set where you need to choose 3 (minimum) dishes from the list to make a complete meal. This is said to be how the dishes were served back then in the village in the old days.
We chose the Daddy’s Stewed Pork @ RM25.80, Tom Yum @ RM23.80 and Stir Fried Kailan @ RM16.80. The stewed pork is not bad but tastes a lot better when you add the chili sauce – so I guess it’s a must. 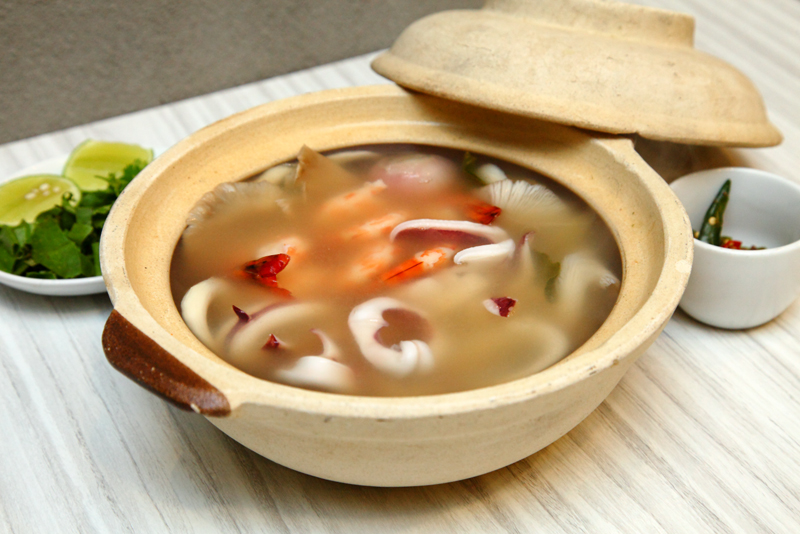 The Tom Yum is available in either chicken or seafood and it’s served only in clear broth. We had the seafood version and were quite happy with the amount of prawns and squids given. However, the freshness of the prawns was just not there. One thing about the tom yum here is that you are able to customize its level of spiciness by deciding on the amount of chili you want to add into it.
Considering this is the first time I have seen tom yum being served in such a way, I think it’s quite special; albeit I have to admit that it’s kind of weird as well. 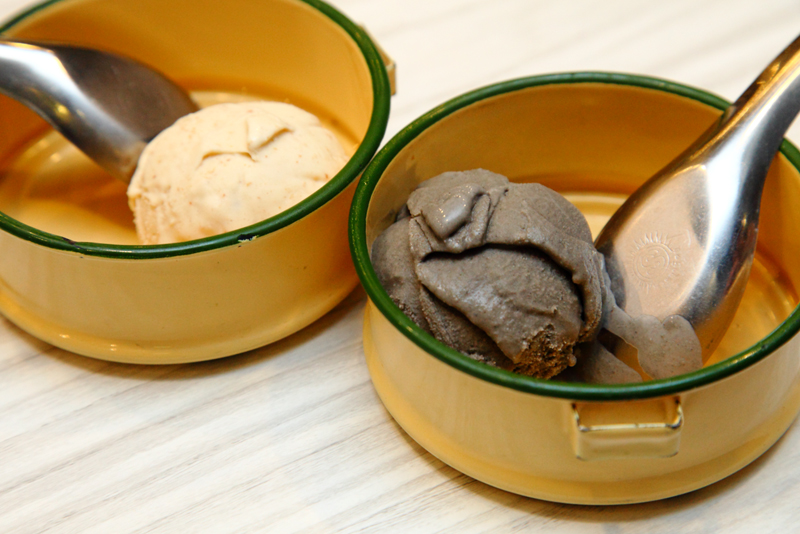 All the ice creams here are homemade @ RM6.80/scoop so they are definitely worth trying out. Flavour wise most of them are quite common except maybe for the roasted peanut & coconut, which had a unique texture and taste experience. There’s a smokiness amidst the saltiness and that pleasantly surprised us. 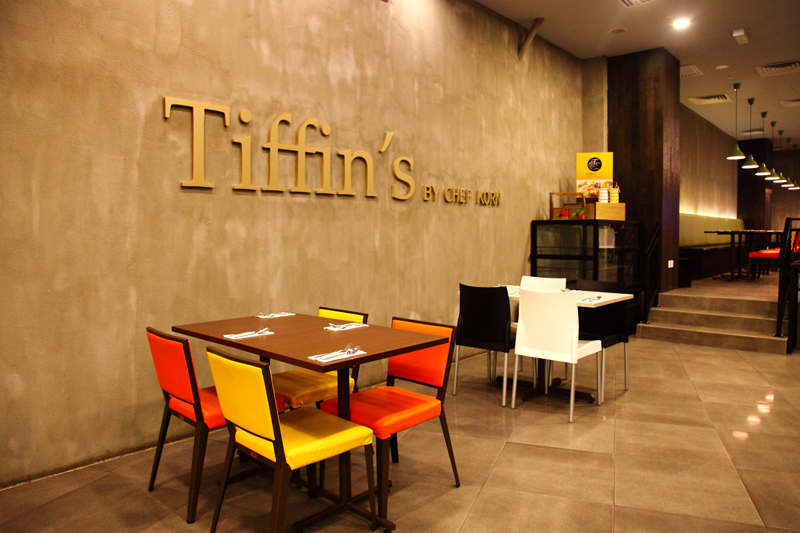 Based on the handful of dishes we had, I feel the food at Tififin’s is above average at best with a few that stood out to me such as the Grilled Pork Neck and Fire Balls.
Price wise I am not going kid you, it’s quite steep compared to what you’d get at the normal Thai restaurants. But lets compare apple to apple – if you compare Tiffin’s with other similar restaurants in Mid Valley Megamall, I think you will find their prices reasonably affordable.

Damansara Heights (Bukit Damansara) August 12, 2015
ABOUT US
VKEONG.COM - Malaysia Food and Travel blog with reviews of restaurants, hawker and street food in KL, Penang, Melaka and beyond.
Contact us: vkeong@yahoo.com
FOLLOW US
© VKEONG.COM - All Rights Reserved