When I went to Guan Heong biscuit shop, I also had the privilege to witness first-hand how their traditional mooncakes are made. I am always inclined to learn how food is made because it leaves me with a renewed and greater appreciation for the things I eat. The most basic ingredients for a mooncake are the dough and filling and both of them are equally important. There are two types of dough involved here and when directly translated, they are called the ‘crispy skin’ and ‘oily skin’. The main difference between them is that one contains water while the other does not.
Apparently this is a common practice when it comes to Chinese pastries. Well, I never knew that. Anyway, according to Mr Sitt (the sifu) the general gist for having two different dough is to create the texture of the mooncake’s crust. Then, a lotus paste log is cut into chunks and weighed before being molded into balls like these. Guan Heong only uses high quality lotus seeds and they grind them into paste at the back of their shop using a stone-made grinding mill. Lard is traditionally added into the paste for the extra fragrance but modern consumers are getting more health conscious. Since then they have switched to use vegetable oil instead. To assemble the mooncake, a piece of dough is flattened into a round shape, fitted with a lotus paste ball and wrapped with all the seams pressed in together. It looks like a simple step but it’s actually harder than it looks, especially if they are making the Meat Floss biscuits. Not saying it’s impossible for us but you’d probably need 3-4 times as long to complete. The same is done for the Teochew mooncakes – just that the cakes are further flattened and have holes poked with a plastic knife. The holes serves more than a design purpose, as they also help to promote heat circulation and maintain the mooncake’s shape when it goes into the baking oven. The wrap is then pressed into a wooden mooncake mold for the final shape. A few hard but careful knocks will dislodge the mooncake from the mold. Finally, apply few strokes of egg wash along the top and sides and they are ready to go into the oven. Half an hour into baking, the kitchen became enveloped in an unmistakable buttery aroma. The crust is now a gorgeous golden brown, seemingly glowing right in front of us – that is when you realize all the hard work has paid off.
And in case you haven’t noticed, the people who make the mooncakes at Guan Heong are a family who have been doing this trade for decades. I seriously feel that we should extend our support to family business such as Guan Heong because they are the ones who strive to keep our culture and traditions alive. Else, we’d end up with only mass factory made mooncakes in the future. ** Guan Heong does delivery to entire West Malaysia. Just call them up for more details. I highly recommend their Shanghai Mooncake. 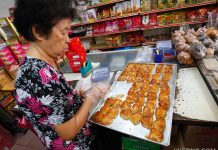 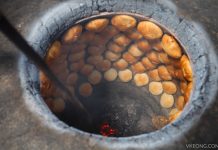 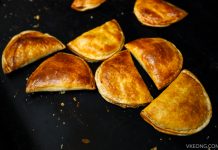