It’s been almost a week I didn’t update my blog, Chinese New Year mah lol.. give myself a break. Not many people go online and surf blogs during CNY anyway, so I guessed it was no point updating either. But blogging inactivity doesn’t mean the owner stopped eating, lol. Here’s a list of what I have been enjoying during CNY, it’s loooooong. The first day, went to Taman Sentosa for the famous Dry Hokkien Mee (Hokkien Ta) The noodles are self made and you have to be early to try it. When the self made ones are finished, they will switch to yellow noodles instead which don’t taste as nice. More about this in future updates. Went to a newly opened restaurant – Yu Lin in Kampung Baru. Their dishes are very nice and cheap. For example, this fabulous Fried Shark’s Fin with Egg cost only RM10! Bukit Tengah’s famous cendol, next to Peng Bin school. Said to be able to rival Penang Road’s. Only RM1.20 a bowl. One of the must try food in Bukit Mertajam, rojak. There are a few stalls here from Rojak Orang Hitam to Orang Putih to Orang Hitam Putih, lol. Taman Bukit’s famous curry mee, only RM2.50 a bowl, nicer than many other in Penang island. Long queues are a common sight at this stall. Dim Sum at Sweet Paradise, Butterworth. Too bad quality has dropped tremendously since my last visit. I have passed by this famous coconut stall located at Abu Siti lane so many times. Last weekend I finally tried it. Really something unique that can be found only in Penang. Pandan coconuts cost RM2.40 each, a little cheaper than those sold in hypermarkets. Very refreshing during a hot afternoon. The always awesome duck egg Char Koay Teow opened on the sixth day of Chinese New Year. Went there with a gang of high school friends for supper after a baccarat session at my house. The biggest winner bought each of us a large plate with extra egg @ RM4. Mei Xiang Way Dim Sum restaurant at Chai Leng Park. A rather new establishment if I am not mistaken. The dim sum selection here is quite limited, but luckily most of them tasted good. The most awesome Cheese Naan and Tandoori Chicken I have ever eaten. When they say they serve the best Tandoori and naan, you better believe it. Only RM8 for a set like this, found at Restoran Kapitan’s on Chulia Street. One of my must haves if I return to Bukit Mertajam, the noodles I have been eating since a kid. The white Wantan Mee at Tua Pek Kong temple. The mee soup (or known as Bee Chai Mak to many) sold right next to the Wantan Mee is nice as well. Perfect way of enjoying it is to pour a spoonful of the watery chili sauce over your noodles, and then eat at one go.

Phew, I think I gained weight for all the good food I had in Penang, lol. As you can see from the list above, there are many foods that I did not blog before. This means I will have something to write about Penang food very soon, yay! So, did you go on a eating spree like me when you were back in hometown for Chinese New Year? 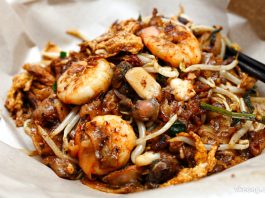