It’s amazing how food ideas are derived sometimes – it might be a sudden inspiration, an experiment with different ingredients, a conversation among friends, or even from a comic! Japan’s culture has a huge influence on Taiwan, and food is one of it. A popular Japan manga (日式面包王) about the story of boy baking his way becoming the King of Bakery had readers actually replicating one of the sandwich featured in it.
Thus, Yakisoba-pan (炒面面包, Japanese Fried Noodle Bun) was born and proved to be a huge hit especially among the teenagers who are always looking out for new and interesting street food. I am pretty sure that this noodle sandwich is no where to be found in Malaysia, as the idea of eating noodle in a bun alone is weird enough to drive any of us away lol.
But not for Taiwanese, they are exceptionally open to new food and drinks, which is why their night market always have something new to try. Ever wondered why their TV Shows on food seems to be never-ending?
Feng Jia Night Market (where the serious sausages are at too) was the place we saw and tried the funky sandwich. We were amazed by the queue stretching as far as 10 meters long at the stall. Then we told ourselves we must give this a try. There are a few flavors available like Japanese, cheese, curry, Thai, American etc.

Two youngsters were manning the stall, one being the chef who stir fries the noodle and placing them into different containers of different flavors. And another lady taking down customers’ order and preparing the buns. As you can see the process is quite straightforward. First, the buns are sliced down in the middle hot dog style and then reheated in a small oven. Then noodles is piled into each bun’s opening according to the flavor. Finally, mayonnaise is added as garnishing with a sprinkle of seasoning on top, curry powder maybe. This is how the Fried Noodle Bun looked like – original flavor @ NT$50. Since only take away is allowed, we had to find a coffee shop nearby to enjoy it. Surprisingly the noodle held on quite well on its own so there was very little mess trying to finish it. It tasted like how you would have expected – simply fried Maggi or Indomee in a hot dog bun with mayonnaise.
Although I didn’t really like it, it’s one of the more memorable street food we had in Taiwan for its uniqueness. Come on, fried noodle in a bun? Mention that to any Malaysian and they would prolly call you crazy for even saying that lol. 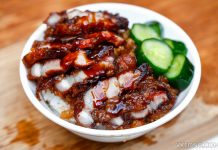 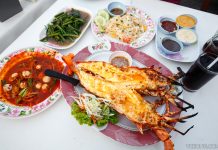 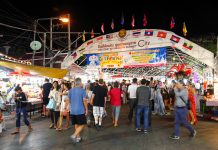