Is Yezi the most gorgeous looking steamboat restaurant in town? Maybe. Does Yezi have some of the most unique broths for steamboat? Definitely. However, those qualities come with a price and it’s quite a hefty one too.
But if you can afford to pay around RM200 or so for a meal for 2, Yezi is an experience worth trying for its unique concept, and not to mention the food’s not bad too. Yezi also places great emphasis on using coconut (hence the name) in their coconut-based broth and in a handful of dishes – a concept that was inspired from a Chinese steamboat restaurant in Shenzhen. 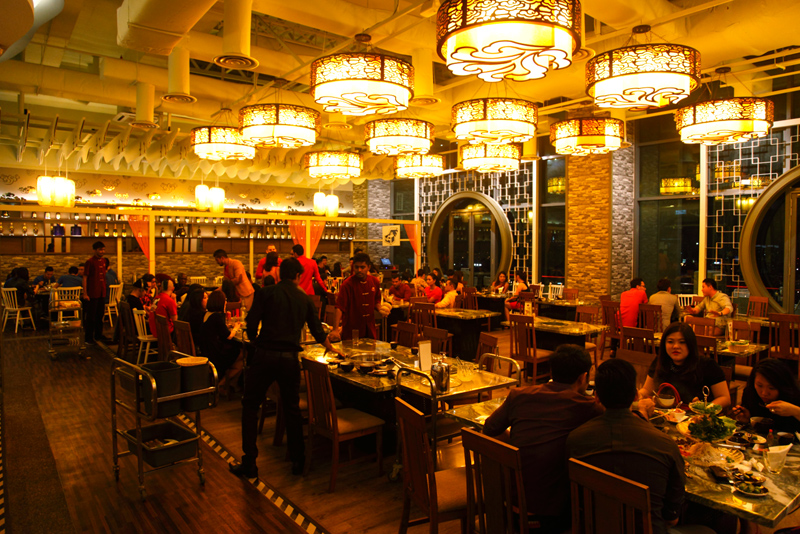 I like to think we came at the perfect time because there was a special MIGF dine for meal deal for 2 @ RM168++ which is only available throughout this month. The set includes most of their best selling dishes so you are able to sample all of them without having to order them a la carte.
Broth is included too and you can choose one out of the five available: Original Yezi Broth, Imperial Canton Broth, Aromatic Taiwanese Beef Spice Broth, Fragrant Shao Xing Wine Seafood Broth and Wild Forest Truffle Mushroom Broth. 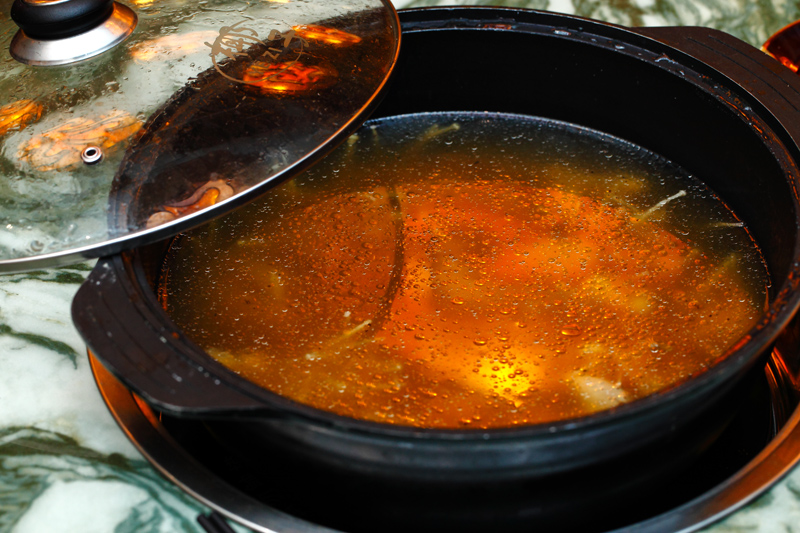 We did not think think too much of it and selected the Wild Forest Truffle Mushroom broth simply because it was listed as the ‘best seller’. Plus, it’s the most expensive broth too at RM78 so I guess this would be the one to pick if you want to get the best bang for your buck.
I am not gonna lie though, the broth doesn’t look very good. But it comes with plenty of mushroom and you could smell the truffle as soon as it hits the table. 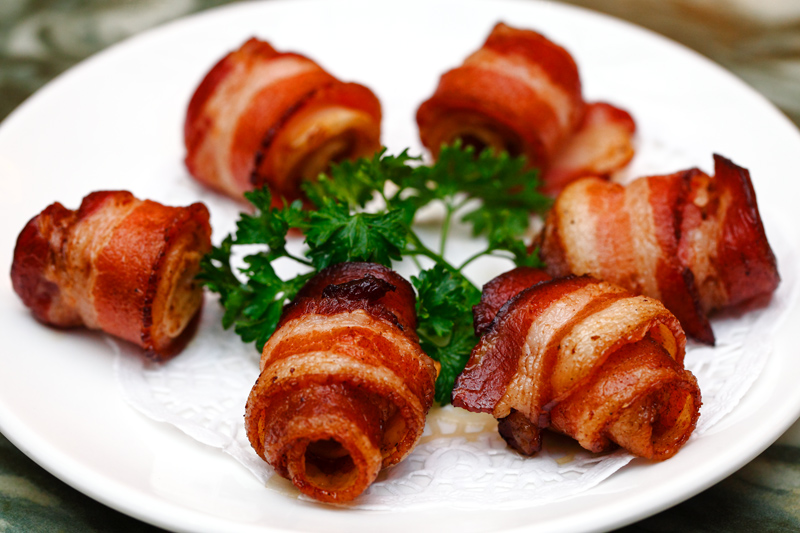 It could take a while for your steamboat pairing dishes to arrive, so munching on a couple of hot dishes while admiring the restaurant’s decor can help to ease the wait.
The Coconut Bacon @ RM15 is exactly what it is: a slice of coconut wrapped in bacon then deep fried. While I could appreciate the novelty, it is a tad dry and chewy. 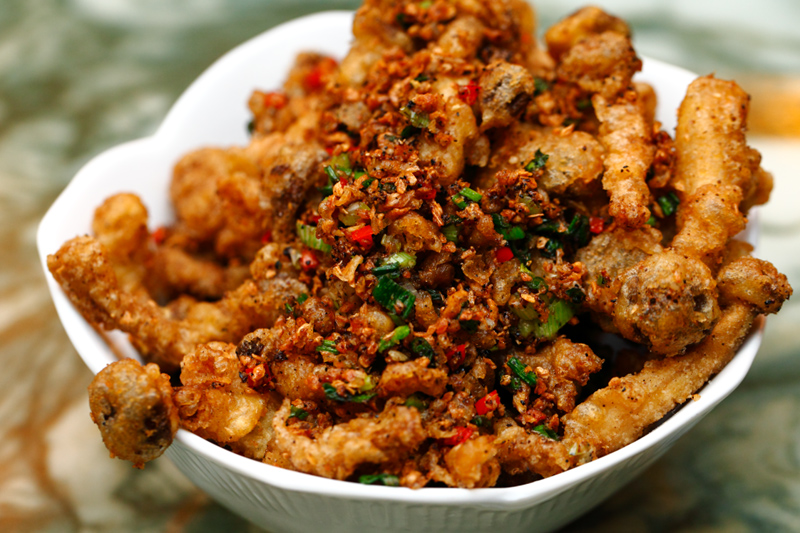 At RM12, the Salt and Pepper Mushroom is a steal for the price – mainly because of its portion size. Taste wise it won’t disappoint but in hindsight we wouldn’t have ordered this because the broth we chose already comes with loads of mushrooms. 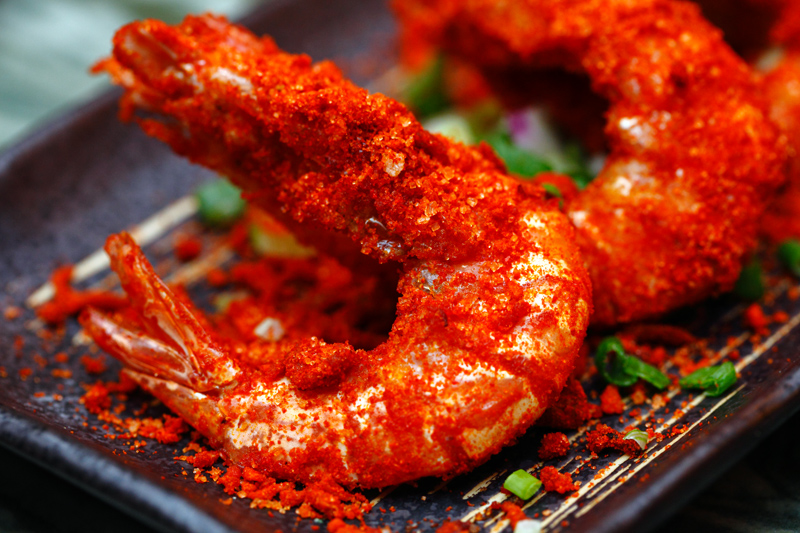 The Garlic Chili Fried Prawn @ RM25 was surprisingly sweet instead of being spicy. Nevertheless the mix of ‘chili’ powder, garlic and sugar was fragrant and enjoyable even on its own. 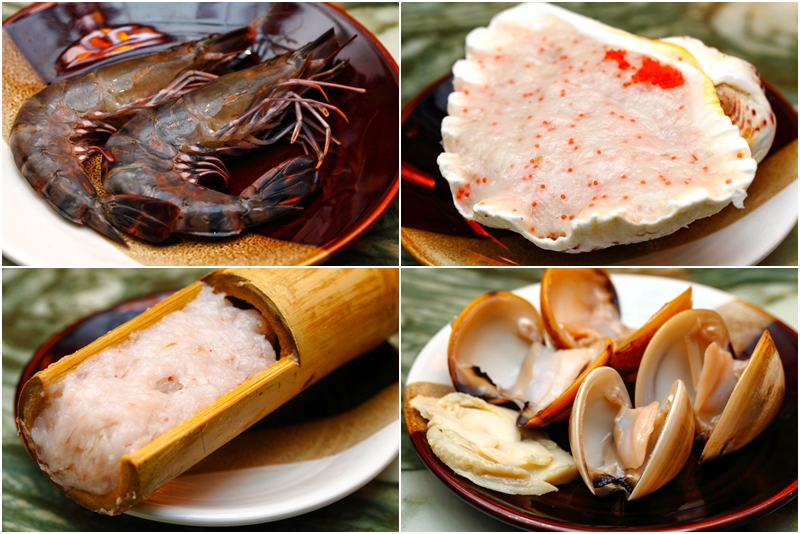 And here are the items that you could expect from the set: tiger prawns, fish paste, clams, abalone slices and prawn paste (excellent). 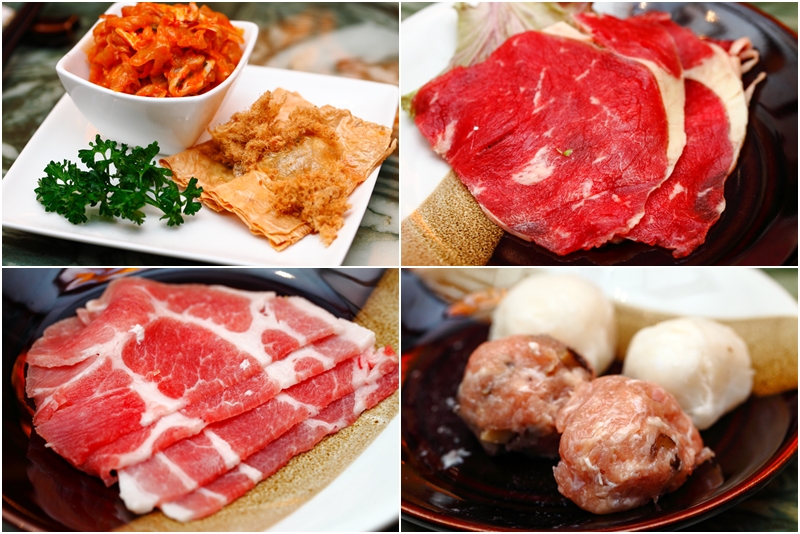 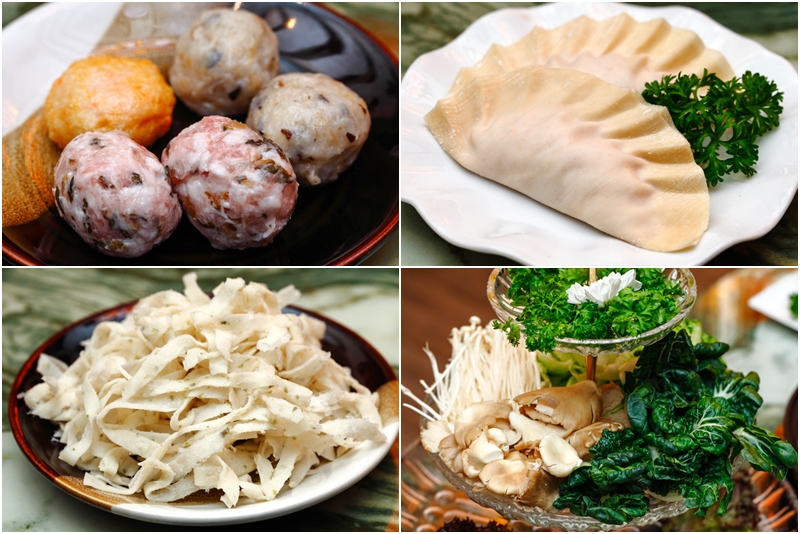 More seafood and meat balls, coconut dumpling (interesting), seaweed fish noodle (a good change from the usual) and mixed vegetables and mushrooms. As you can see, there’s no processed food at all and even the meat balls and seafood paste, which seem like the most ordinary stuff, are all homemade by hand fresh daily. 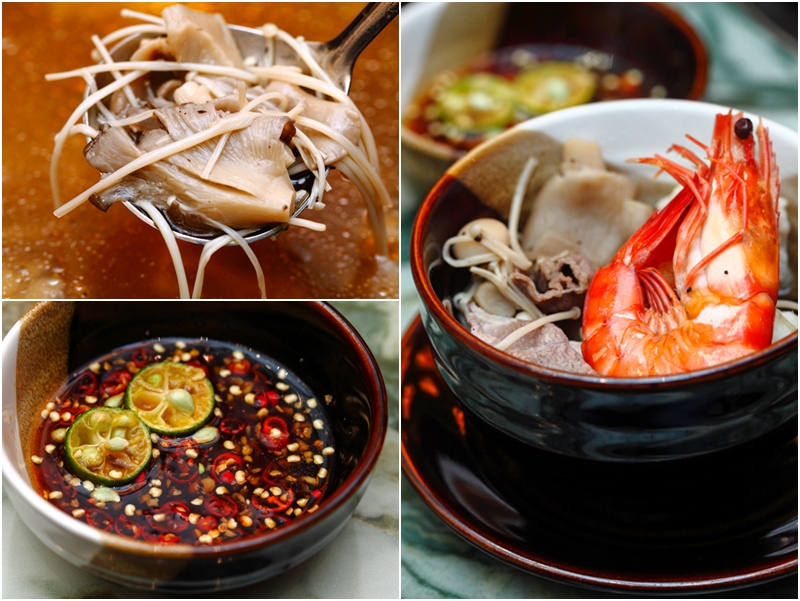 Besides fresh and high quality ingredients, Yezi’s dipping sauces are noteworthy too. Their chili sauce might very well be the spiciest in town and it’s wonderful. 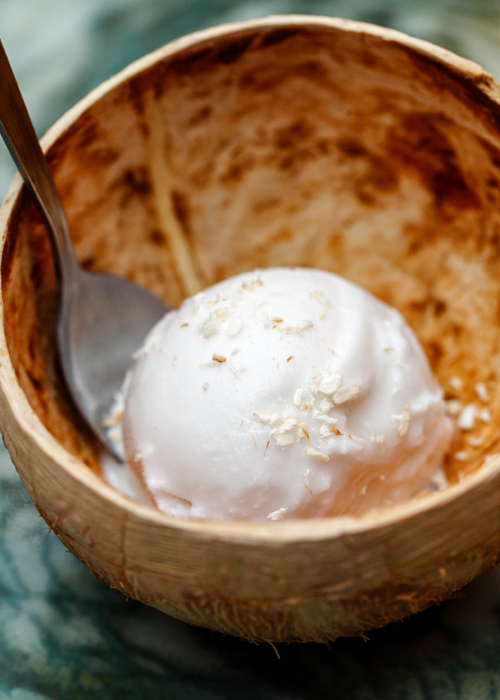 For dessert, we had the Fragrant Coconut Ice Cream that’s absolutely decadent and delicious. It’s full of coconut flavour, not too sweet and the intense creaminess is simply divine. This is as good, if not better than Sangkaya’s. 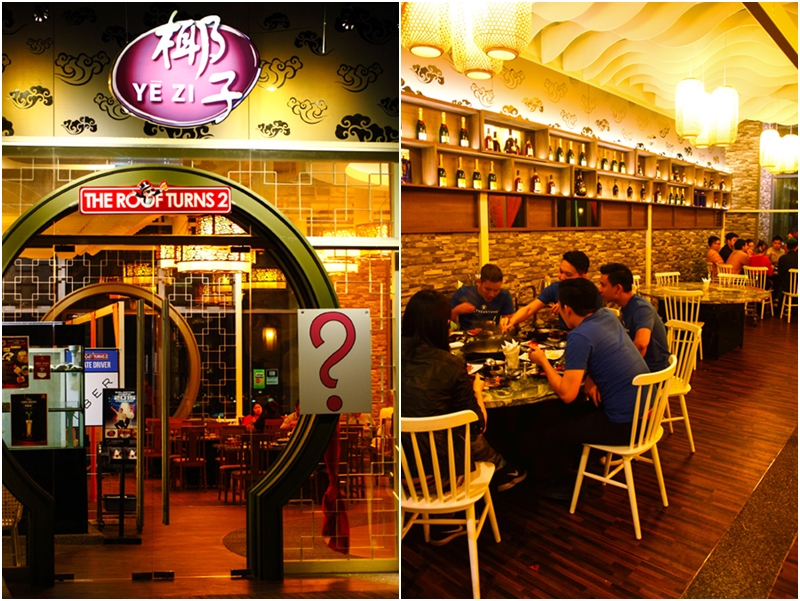 Although the hot dishes we had did not really impress, the steamboat here is satisfying enough to hit the spot. The amount of food served in the set meal might be underwhelming for some, so you will end up filing yourselves with all the mushrooms that never seem to finish.
Unfortunately service was inconsistent with plenty of rooms for improvement, as some staff are noticeably more attentive and alert than the rest. 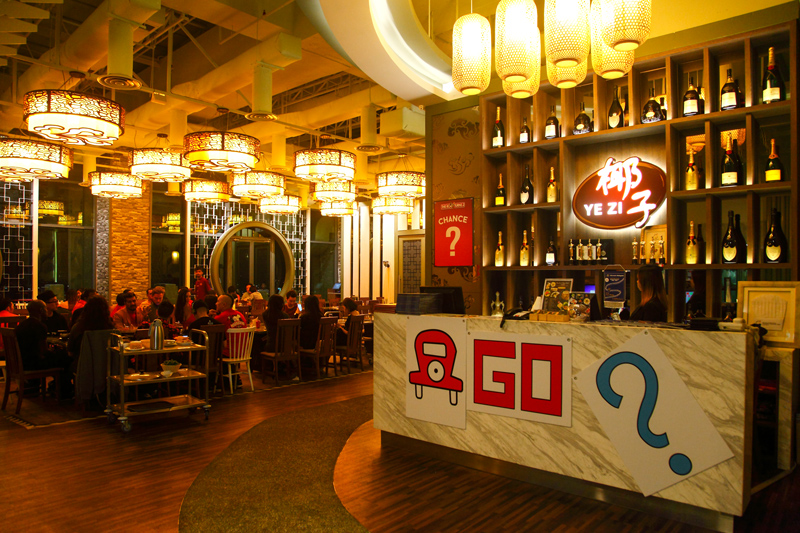