Few weeks ago, I went to try the famous Claypot Lou Shu Fan at Yoke Heng restaurant, Serdang Raya. Actually, I already knew the restaurant’s existence through an ex colleague about 3 years ago. At that time, claypot Lou Shu Fan was a topic we always talked about, especially during lunch time. Haha, can’t believe it took me so long to actually get to try it. Unlike other claypot Lou Shu Fan which is usually very dry and dark in color, this has white-yellowish gravy instead. It is a very popular place for lunch among those working in TPM (Technology Park Malaysia) and Astro Bukit Jalil. But don’t worry, it opens at night as well because I had this for dinner. I am still not very sure what are those crunchy brown stuff on the Lou Shu Fan. They tasted like lard to me, but some claim they are dried shrimps. Well, I don’t really care whether they were lard or dried shrimps as long as they make the noodles tasty lol. And the thick, gluey gravy with those ‘rat tails’ reminds me of shark fin soup with fattened shark’s fin. Another thing that makes it similar to eating shark’s fin would be adding black vinegar as the accompaniment. I don’t know about you but when it comes to black vinegar, I can only associate it with shark fin soup lol. If you are wondering, a serving for three like this cost RM15 or equivalent to RM5 for each pax. Quite reasonable if you ask me, just that I didn’t really feel full after the meal. Besides claypot Lou Shu Fan, Yoke Heng is also famous for their Chinese dishes like sweet and sour pork (Gu Lou Yok). One of my friend who tagged along for dinner ordered it which came wrapped in aluminium foil. I don’t have any photos of it so maybe I will return in future to try it myself. Yoke Heng is located along Serdang Raya road towards KL, just opposite BHP Petrol Station. 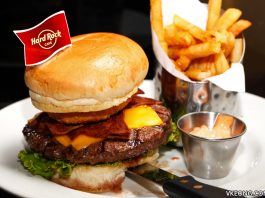 Eat April 24, 2016
ABOUT US
VKEONG.COM - Malaysia Food and Travel blog with reviews of restaurants, hawker and street food in KL, Penang, Melaka and beyond.
Contact us: vkeong@yahoo.com
FOLLOW US
© VKEONG.COM - All Rights Reserved