Touted as the best dim sum in Penang by some, I just had to try it for myself. Zim Sum Tea Garden dim sum restaurant is located directly opposite KDU along Anson Road. If you have difficulties finding this place, just look out for Penang Plaza and Sheraton Hotel.

The variety here is good enough, there are a few dim sum which are new to me. But I just took the common ones. Some of the staff here are quite rude and clumsy.. Our table was knocked hard by the push carts and I was excused to make way for the waitress at least twice for each incident. If I were to open a restaurant, she’d be the first to go. To me as a customer, that’s a totally unacceptable attitude.

Egg tarts are good, warm and fresh from the oven. I like egg tarts like these, with puffy crusts. This twin buns have char siew in them. There are other varieties as well like peanut and meat floss.

Overall, I won’t think too highly of Zim Sum Tea Garden. The dim sum taste mediocre although they look really good. I was already disappointed and lost a bit of mood after my first bite.. Worse still, there was a pirated DVD peddler from China getting caught and handcuffed by the enforcers right in front of me. Man, that totally put off my appetite. The only good thing about this place is the cheap price, I only spent RM11.20 for this meal. 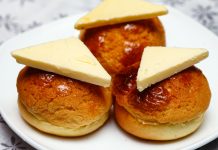