If you have been to Melaka recently you might seen or heard of Melaka Alive – a musical theatre show that’s set on a ship inspired stage. Held twice a day in the evening and at night, Melaka Alive tells the state’s 600 years of history through special and visual effects, music and live acting.
After the successful launch of Melaka Alive, a new 5D product called “The Pirate Adventure” has recently opened its doors to adventurous and fun-seeking visitors. 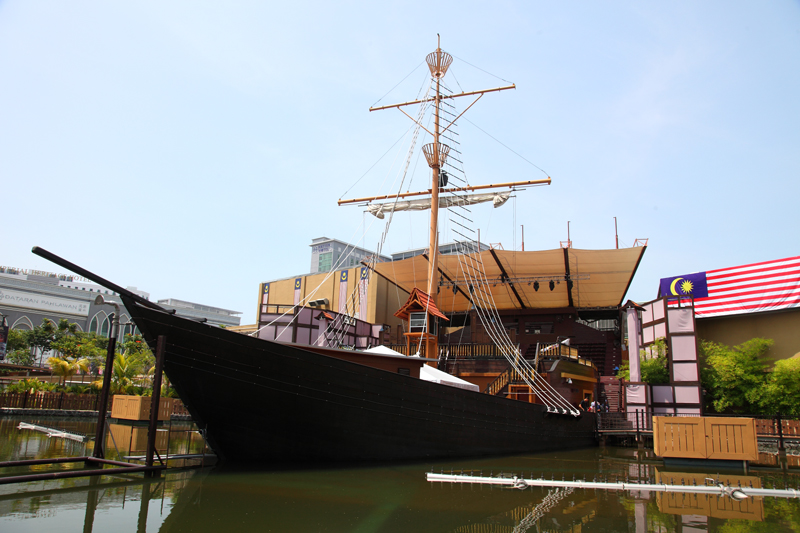 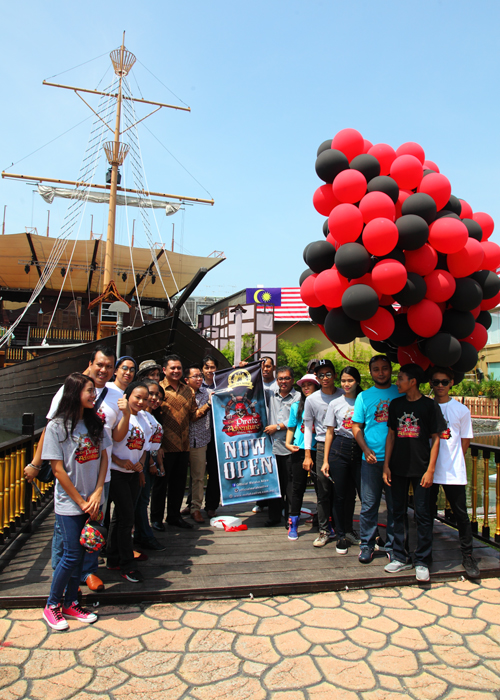 Mohd Nizar B Mohd Najib, advisor to Nuevo Attraction & Destination (owner of Melaka Alive) graced the launch of attraction and gave a welcoming speech to the guests before leading us to partake on a tour of the latest attraction.
With the aid of sophisticated technology to immerse visitors in the world of pirates, Mohd Nizar is convinced that Melaka’s tourism will receive a huge boost from The Pirate Adventure, as it targets to attract at least 20,000 visitors monthly. No quarter! Now that’s impressive if ye ask me. 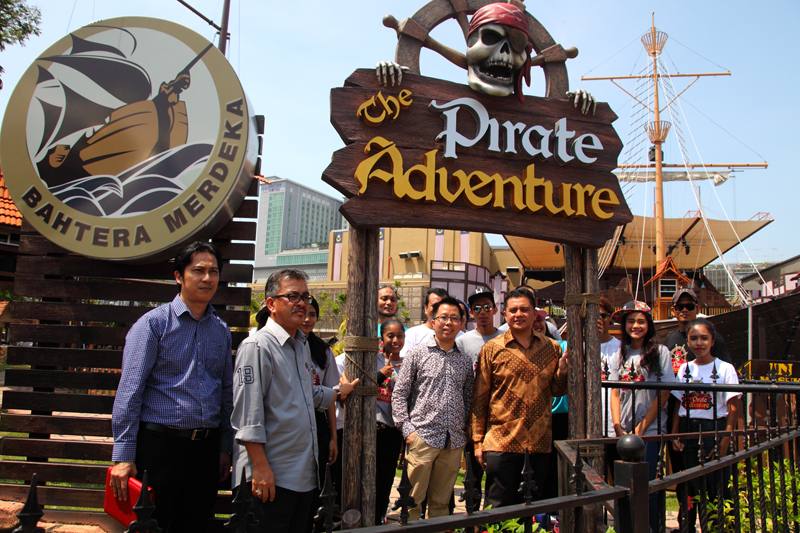 Also present was Melaka Museum Corporation (PERZIM) general manager Y.Bhg Datuk Haji Khamis B Haji Abas. This is one of the most picturesque spot for photo opportunities, basically everyone wanted to have a photo with the ship behind. 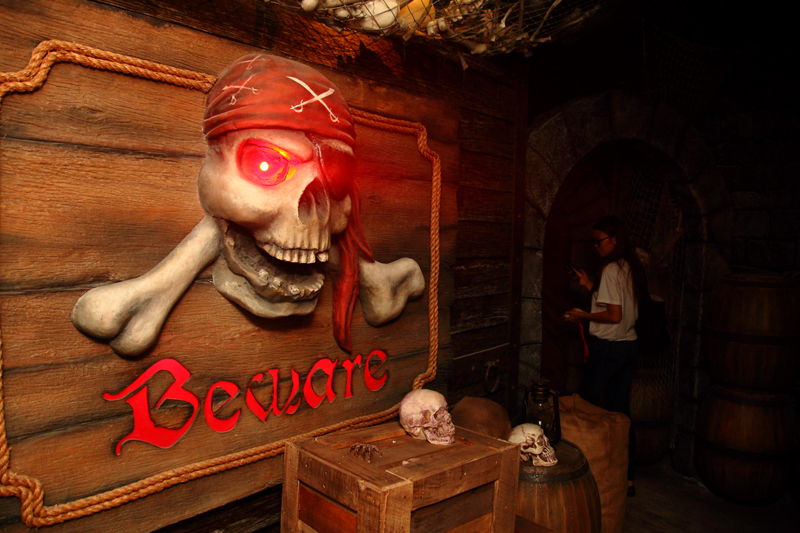 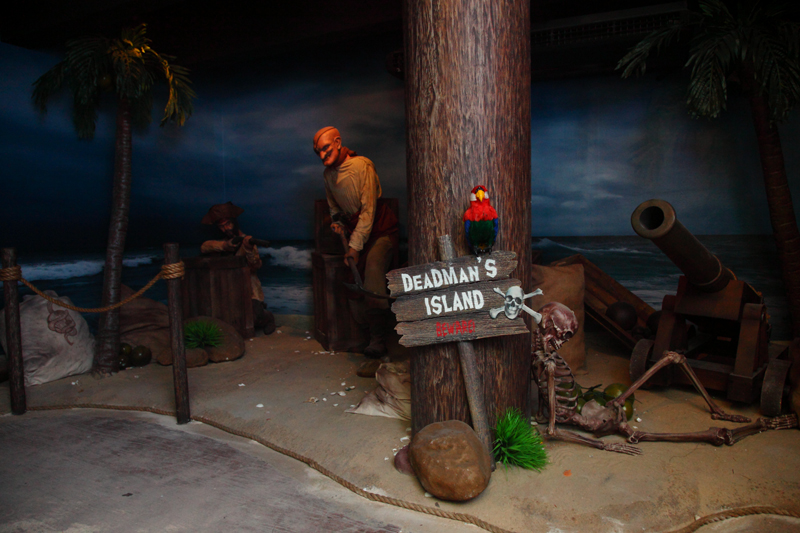 Sail ho! now lets git on thee galleon. So what exactly makes The Pirate Adventure a 5D attraction? Without spoiling too much about the attraction, just know that there will be live actors, props and special effects to transport you to a another dark and sometimes scary world.
Even though it was a media tour of the attraction, the actors did not spare anything and did their thing to scare us (not over the top though) – so much so that some of the more timid girls screamed out loud. That said, if you get spooked out easily you may want to cling on to a friend while exploring the ship. 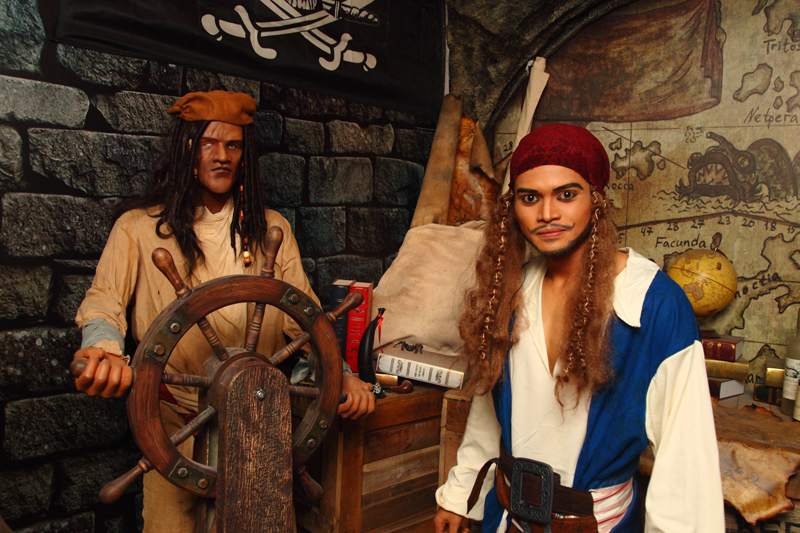 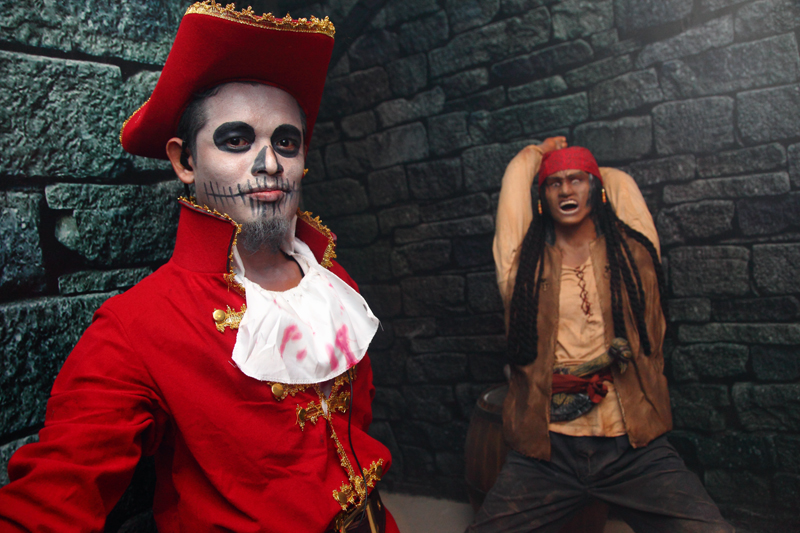 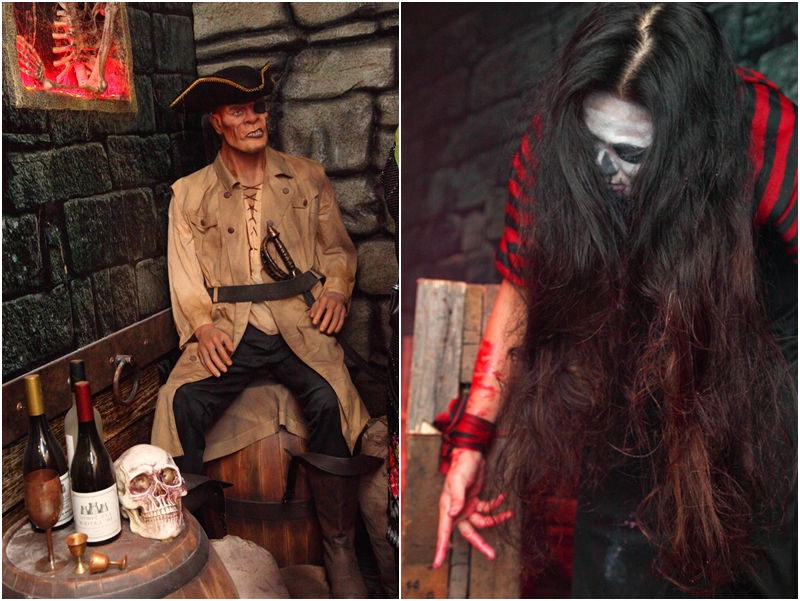 Besides having authentic looking props, the actors were well costumed – so it all felt like a really well made and high-budget production. Personally I feel the actor with the long hair was the most convincing with his bloody appearance and gestures. Sure, he doesn’t look very intimidating in this photo but when you’re there and it’s dark and all, it’s going to be a different story altogether. 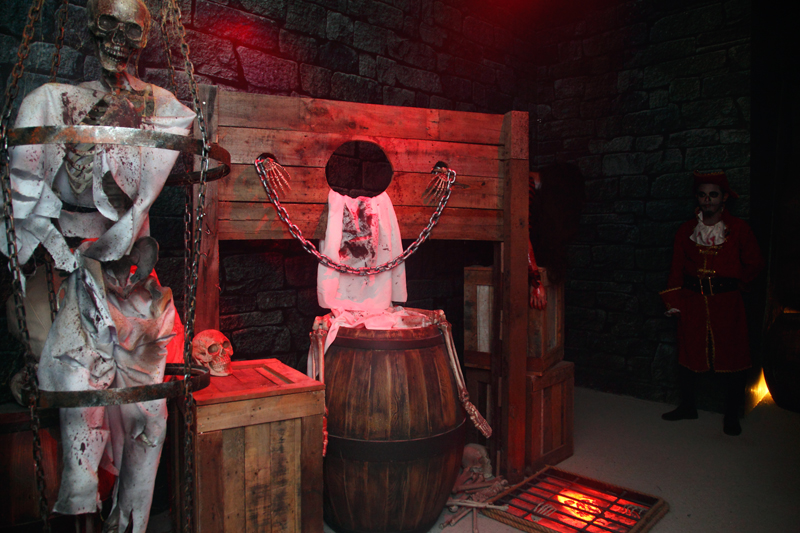 One of the cool things about The Pirate Adventure is the special effects used to recreate the misty and humid environment, just as what you’d actually feel when at the sea or in a jungle. Ye come seeking adventure and salty pirates, eh? Aye, you’ve come to the proper place. 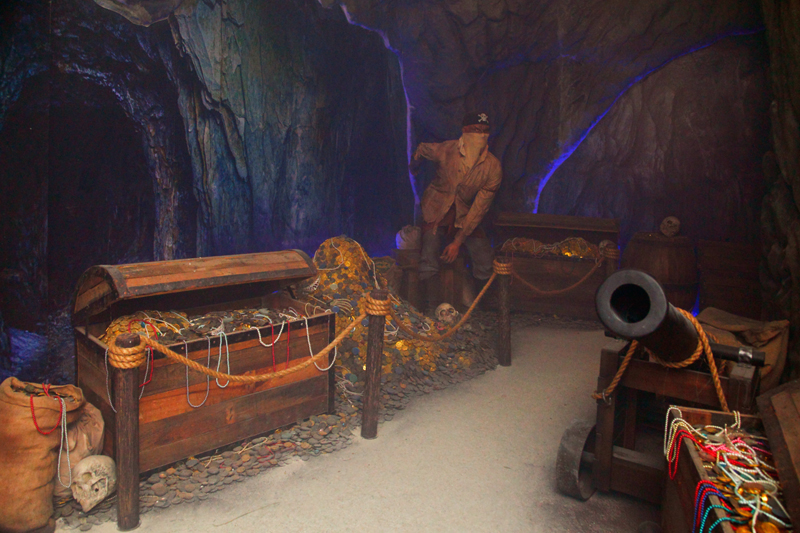 And what’s a pirate ship without some booty? Be careful though, it’s closely guarded and you wouldn’t want to be caught pocketing the gold and…. 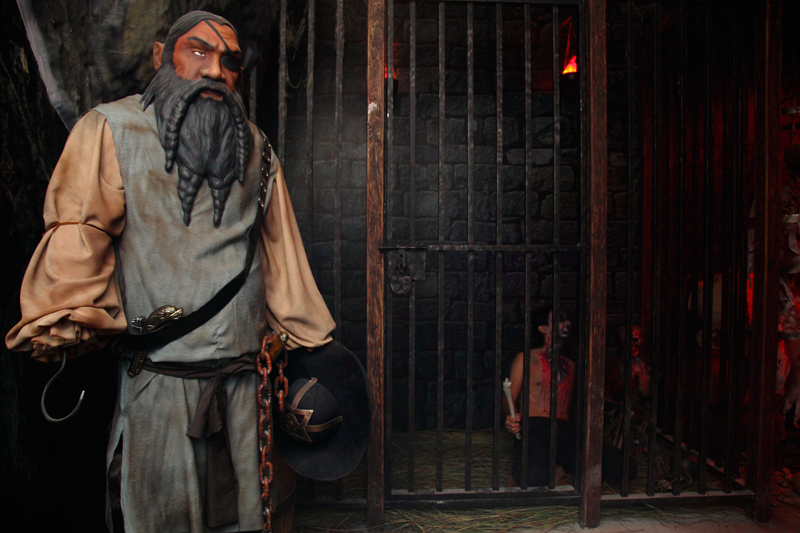 … get thrown into thee hold for trespassing and end up as cell mates with the poor guy. After navigating through the misty sea and jungle filled with menacing pirates and dead, time for some mini cinema session at the auditorium next door where guests will be entertained with a short but exciting clip of high sea action. 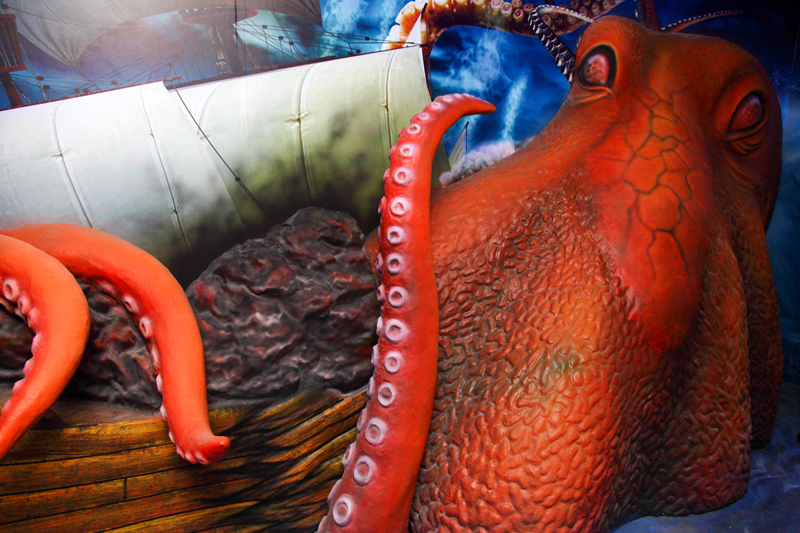 The most popular section of the entire attraction could very well be the very last stop before you exit to the gift shop. A super-large 3D octopus is seen attacking the ship and what will you do? Take more photos of course! You won’t want to miss the chance for a memorable photo with your family and friends here – I simply can’t think of any other places with anything like this. 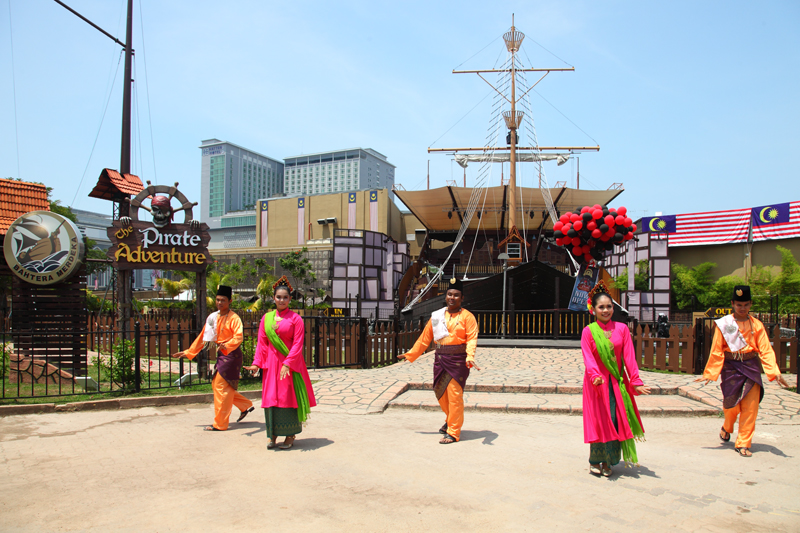 I timed how long I spent in the tour and it was close to 30 minutes, and that was in a rather rushing manner. So if you really take your time to immerse yourself in the atmosphere, I think you will definitely spend a longer time in the ship.
And since it was a launching event, we were treated to a Raya Open House lunch later where we had a delicious meal with music and dance entertainment. I know this might be off-topic but the singer’s live performance that day was so good that I thought they were playing the songs from a recorded CD or something. Now comes the most important part: how much is the ticket to The Pirate Adventure? As you can see from the flyer above, it’s RM23 for adult MyKad holders, and RM17 for children (age 4 – 12 years old) and senior citizen (60 years old and above) with MyKad.
However, what it doesn’t show is that you could actually get 20% discount on the tickets if you buy them online. It’s not much but every Ringgit counts! 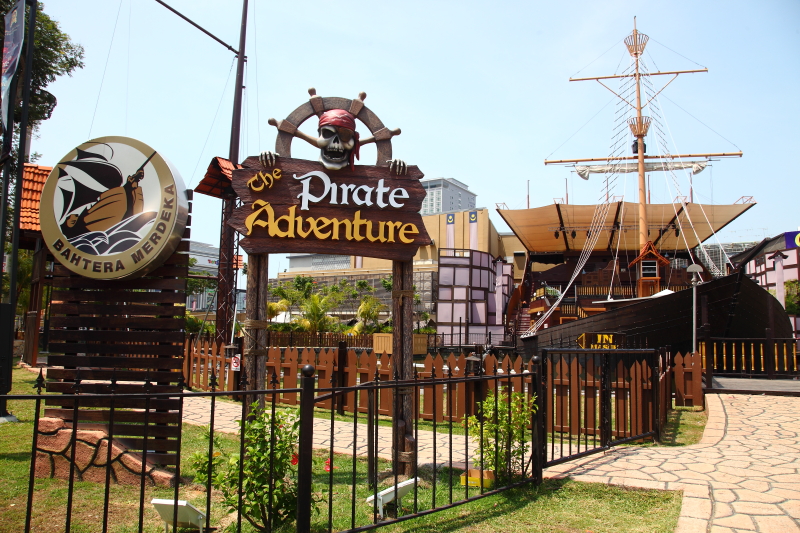 The Pirate Adventure might not be fanciest attraction you’ve ever been to, but it does have its own charm and uniqueness to hold its own in Melaka. So get in the spirit of having an arr-some time and you might find yourself enjoying some family-friendly fun with a mixture of scariness, excitement and adventure.

Ampang November 7, 2015
ABOUT US
VKEONG.COM - Malaysia Food and Travel blog with reviews of restaurants, hawker and street food in KL, Penang, Melaka and beyond.
Contact us: vkeong@yahoo.com
FOLLOW US
© VKEONG.COM - All Rights Reserved