This is known as the famous “Kek Sng Kio” or Sungai Road Laksa and besides being delicious, its cheap price is one of the main attractions. Also, they have maintained the traditional ways of heating the laksa using charcoal, something rarely seen nowadays in Singapore. Using charcoal fire is said to maintain the warmth of the laksa gravy better than gas, which also gives it a distinctive flavor in return. There are a few stalls within the vicinity, all claiming to sell the authentic “Kek Sng Kio” Laksa so it could be quite confusing. Even though I have done my homework to identify the actual stall prior to coming, I still had to call a friend to confirm lol. I wouldn’t want to end up eating at the wrong stall like some other bloggers did after traveling all the way here.
One of the signs that you are at the correct stall would be having a look out for a queue. Secondly, the old aluminium pot of laksa gravy must be there sitting on a charcoal stove. Thirdly, there will be an uncle preparing the noodles behind. At only $2 a bowl the portion is expectedly small but they certainly did not skimp on the cockles, one of the main ingredients in a bowl of laksa. The amount was considered a lot, almost double of what the usual laksa stall would give and they tasted very fresh too.
Based on my personal experience of tasting laksa around Singapore, one thing I noticed is the consistency in the flavor of the laksa gravy. I once highly praised the Original Spoon Katong Laksa at Bedok but in the eventual visits that followed, I found that the taste had somehow deteriorated. The same for the other branches. But Sungai Road’s Laksa did not suffer from this, the consistency is well maintained. One distinctive difference between Sungai Road Laksa and the rest would be its lighter and not so coconut milk-ish gravy that makes it easier for your palate and stomach. Simply satisfying and there was nothing to complain about. After all, it is only $2 a bowl. 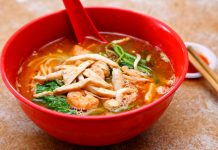 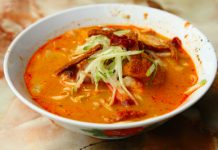 A day at Singapore Zoo